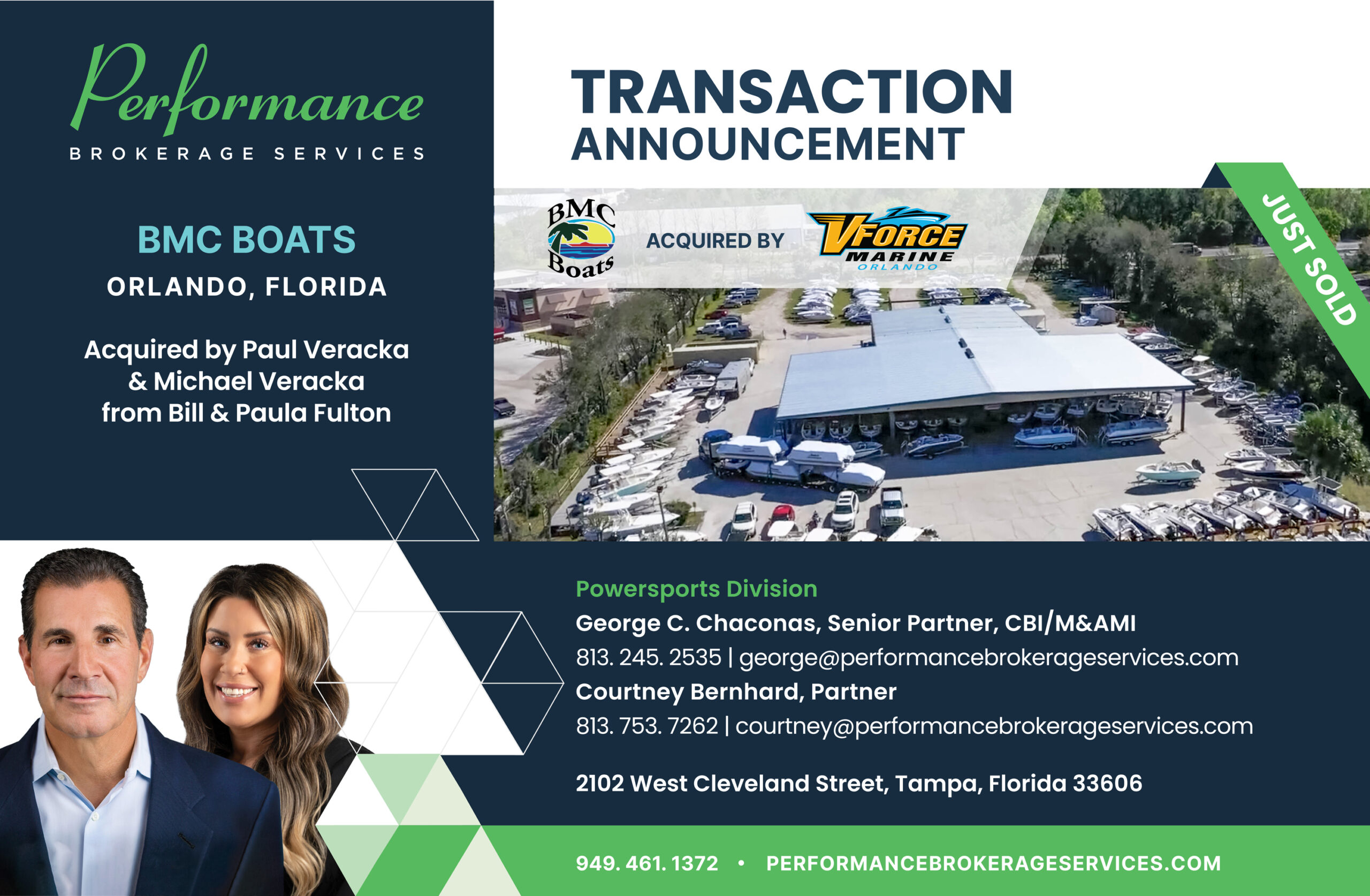 BMC Boats has been a family-owned and operated dealership since 1998, faithfully serving the needs of Central Florida’s and Orlando’s fishing and pleasure boating community. The business places a strong emphasis on its community and considers its customers part of the family.

“I would like to thank George Chaconas and Courtney Bernhard of Performance Brokerage Services for their professionalism, expertise, follow-up, and responsiveness in our buy-sell transaction,” said Bill Fulton, Owner of BMC Boats. “They were extremely helpful in consummating the deal. If you are considering buying or selling a marine/boat dealership, please consider them.”
Over the last 5 years, Performance Brokerage Services has advised on the sale of over 300 dealerships, making it the highest volume dealership brokerage firm in North America. In 2022, the company consummated 92 transactions, marking a record-breaking year. “I had been told by a mutual friend of Bill and Paula Fulton that after spending 24 years building their highly successful retail boat business, they were considering selling. Shortly thereafter, I met with them, and we really hit it off,” said George Chaconas, the exclusive buy-side advisor for the Verackas in this transaction and Senior Partner at Performance Brokerage Services. “Knowing that the Verackas were looking to diversify their portfolio from just Harley-Davidson and expand into the marine industry, we felt the opportunity and timing was perfect. After quick negotiations, we put together a deal that both parties were comfortable with. I enjoyed helping Bill and Paula retire and look forward to helping Paul and Michael grow and expand in a new industry. I am very grateful to have been of service to both parties. I wish Bill and Paula a happy retirement and the Verackas great success on their new adventure.”

Bill and Paula Fulton’s love for the marine industry is evident by the awards from multiple boating manufacturers that they proudly display in their showroom. The couple has also been recognized in Boating Industry Top 100 numerous times. Bill believes their long-term success has been their dedication to the training and coaching of their employees and feels it is one of the most important attributes of being a leader. Bill’s leadership in the dealership is evident by the dealership’s strong reputation and the positive reviews from their repeat customers.

“I’m excited to team up with my brother again after we split off into our own Harley-Davidson groups several years ago,” said Michael Veracka, Owner of MOD Enterprises. “We’re both avid boaters and the marine industry seemed like a great opportunity to get back into business together and build a world class marine dealer group. There is a great opportunity to consolidate the fragmented marine industry and apply some of the systems and procedures we’ve built in our motorcycle dealerships over the years. We plan to acquire another 6-8 marine dealerships and grow from there. Courtney and George brought me the BMC Boats opportunity and we were able to pay over market value to get a fully operational, well-run dealership to learn the industry.”

The dealership will remain at its current location of 3175 North US Highway 17 92 in Longwood, Florida and has been renamed VForce Marine Orlando.
Bill and Paula Fulton were represented by Scott E. Johnson of Moran Kidd in Orlando, Florida. Paul and Michael Veracka were represented by Mark Petti of Petti Law Group in Brockton, Massachusetts.