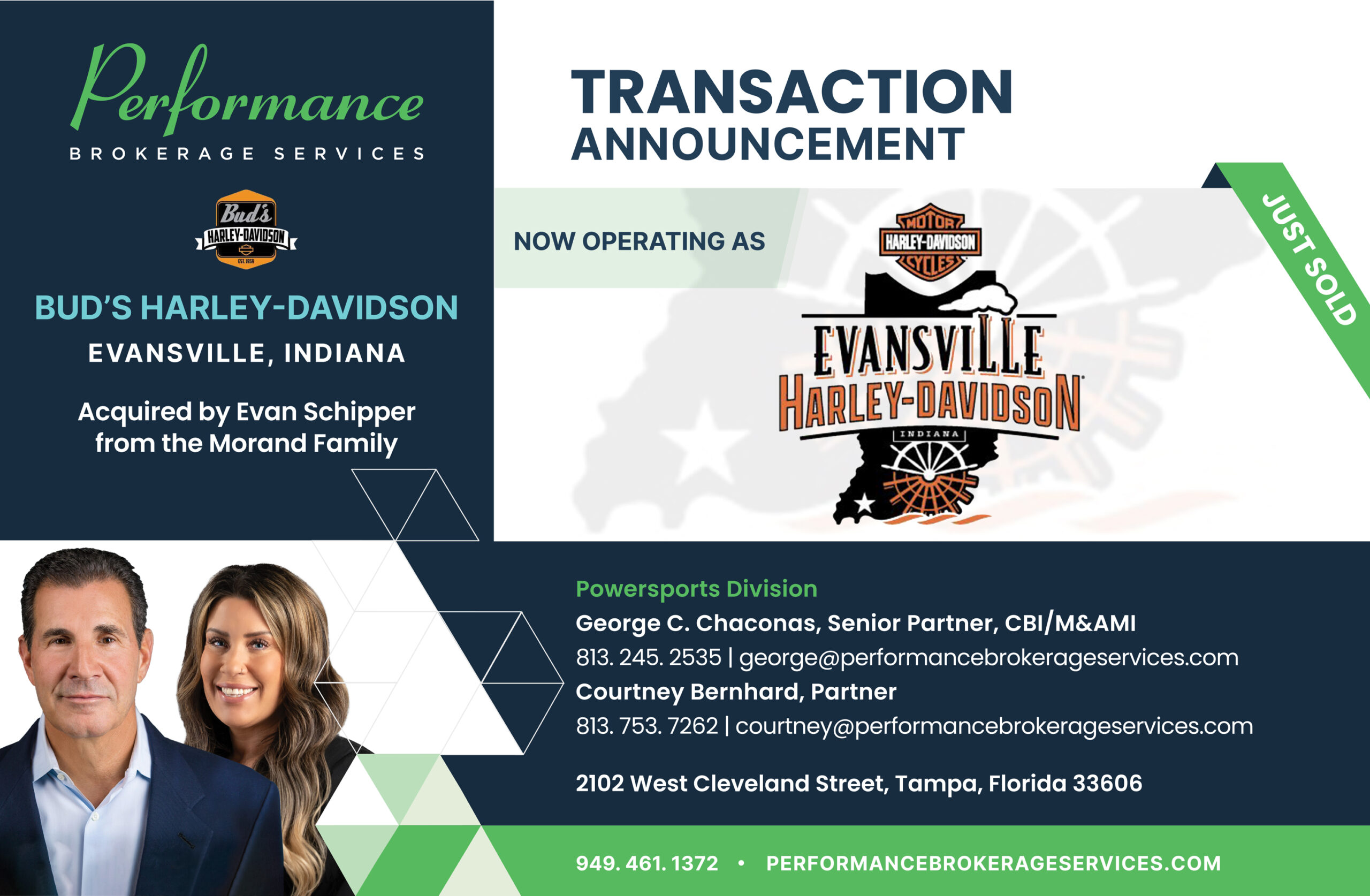 Established in Evansville in 1965, Bud’s Harley-Davidson has been family-owned and operated by four generations over the years. Prior to the sale, the business was run by the two granddaughters of the original owner and motorcycle enthusiast, Bud, who worked at the dealership until the age of 81.

New owner Evan Schipper takes over with a strong connection to the motorcycle industry and the community, as Indiana is home for his family. Schipper started out in the Harley-Davidson industry in 2006, and owns several dealerships in Fort Wayne, Indiana, Louisville, Kentucky, and St. Louis, Missouri.

“We would like to thank Courtney Bernhard and George Chaconas of Performance Brokerage Services for making the sale of our dealership a remarkably smooth transaction,” said Dawn Morand, Owner of Bud’s Harley-Davidson. “Their professionalism and knowledge of the market and process were top notch. I truly enjoyed their insight and the collaboration throughout the whole process. After 63 years as a family-owned business, it was an emotional journey, and they were instrumental in finding the right buyer who shares in our family values and will continue the legacy Bud Burnett and our family have built in the community. Now we’re off to start the next chapter with more business adventures and a lot more riding!”

Over the last 5 years, Performance Brokerage Services has advised on the sale of over 300 dealerships, making it the highest volume dealership brokerage firm in North America. In 2022, the company consummated 92 transactions, marking a record-breaking year.

“Having sold Luck Penny Harley-Davidson in Fort Wayne, Indiana to Evan Schipper, it was a great pleasure to represent Evan and his team on the acquisition of Bud’s Harley-Davidson in Evansville, Indiana, with the assistance of my partner, Courtney Bernhard,” said George Chaconas, Senior Partner and Head of the National Harley-Davidson and Powersports Division at Performance Brokerage Services. “I am very proud of the way she facilitated this transaction. I’m excited for Evan to continue to strategically grow his footprint, and I look forward to assisting with his future growth. I wish him much success with this new store. I would like to congratulate the Bud’s family on their very well-deserved retirement after decades of ownership.”

“Timing is everything and I couldn’t have been luckier to connect with Dawn Morand when I did,” said Courtney Bernhard, Partner at Performance Brokerage Services. “Even though she was not on the market to sell, she agreed to let me do a valuation and walk her through what we are seeing in the industry. After speaking with her family, she decided to let me bring a strategic buyer. Evan Schipper was ready to acquire another dealership, so we presented him with Bud’s, and the rest was history. With the professionalism of both buyer and seller, it couldn’t have been a better match, and we were able to negotiate a deal that worked for both sides. All parties worked together and were an absolute pleasure during the entire process. I can’t thank the Morand family and Evan Schipper enough and wish them well in their future endeavors.”

The Morand Family got their start in the motorcycle industry in 1957, when Bud Burnett founded Bud’s Harley-Davidson in Lawrenceburg, Indiana. Bud later moved his business to Evansville, where it remains the longest serving Harley-Davidson dealership in the area.

“This is my second Harley-Davidson dealership that I bought through George Chaconas, though this time with the help of his partner, Courtney Bernhard,” said Evan Schipper. “I engaged them on a buy-side agreement where they identified opportunities that were not on the open market and thought would be a good fit for me and my strategic growth strategy. Shortly thereafter, they identified Bud’s Harley-Davidson in Evansville, Indiana and we quickly consummated a deal. It would not have happened without their help, professionalism, industry knowledge, and expertise. I would highly recommend George, Courtney, and their Performance team if you are considering buying or selling a dealership.”

The dealership will remain at its current location of 4700 East Morgan Avenue in Evansville, Indiana and has been renamed Evansville Harley-Davidson. In addition, all current staff members will remain with the business.