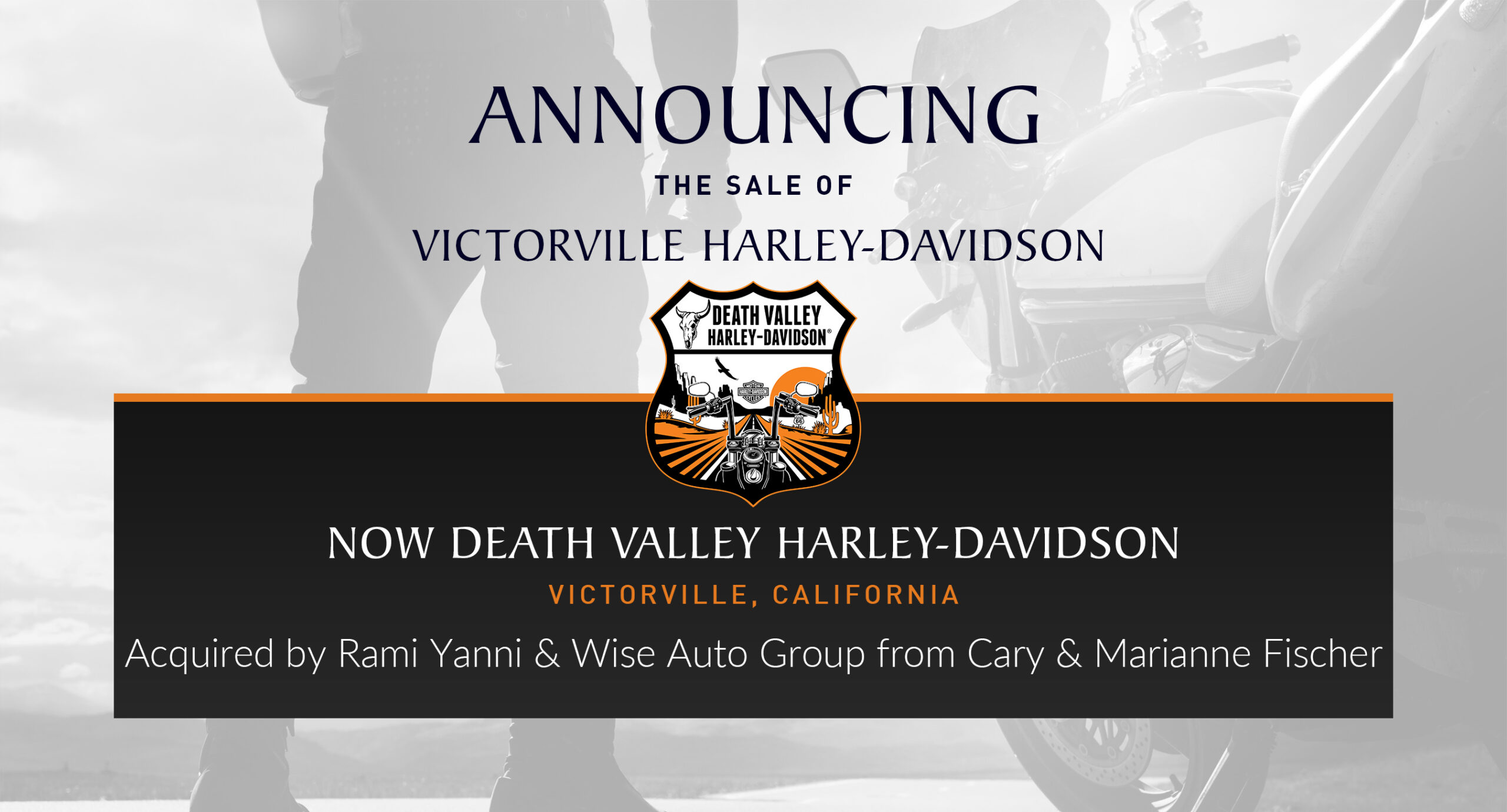 Performance Brokerage Services, the nation’s leading dealership broker, is pleased to announce the sale of Victorville Harley-Davidson in Victorville, California from Cary and Marianne Fischer to Rami Yanni of Wise Auto Group

Victorville Harley-Davidson was purchased by Cary and Marianne Fischer in 1993. The dealership is located on the southwestern edge of the Mojave Desert and sits off the iconic Route 66. The first three years were spent negotiating and developing the current property off the I-15 directly across from the Roy Rogers Museum who was also known to make frequent visits to the dealership over the years. For most, the town may have just been a pit stop while traveling, but for the customers of Victorville Harley-Davidson, they were family. The dealership hosted numerous large-scale events over the years, such as the Wrightwood Music Festival located in Wrightwood, California and 22 miles from the dealership. The festival had over 3,000 attendees. Every bar, restaurant and ice cream shop were sold out within the first day of the festival. The dealership also received repeated awards for holding the largest single day blood drive each year for the San Bernadino Blood Bank. The Fischer’s are also co-founders of the Desert Thunder Children’s Charity with the San Bernadino Sheriff’s Department Footprinter Association, which included a ride that was held every year in Primm, Nevada and began at the dealership. Many more events took place over the past three decades and the customers knew they were very much part of an iconic dealership in the desert. Cary commented, “With gratitude, we would like to thank George Chaconas and Courtney Bernhard of Performance Brokerage Services for putting us together with the Wise Auto Group within a few weeks of signing our agreement. The Wise Group was amazing to work with. They were very professional, organized, and helpful with the transition. They treated us like family and recognized our almost 30 years of accomplishments. It’s not easy to wind down, but this was a winning combination all the way around.”

Over the last 5 years, Performance Brokerage Services has represented for sale over 300 automotive and motorcycle dealerships making it the highest volume automotive and motorcycle dealership brokerage firm in North America. George C. Chaconas, the exclusive advisor for this transaction and the head of the National Harley-Davidson and Powersports Division for Performance Brokerage Services, “Over the past 20 plus years that I have been in this industry, it has become more evident that relationships and trust are valued more than ever. After selling Ray Malzo’s Orange County Harley-Davidson in 2017, Ray introduced me to Cary and Marianne Fischer of Victorville Harley-Davidson. I immediately went and met with The Fischer’s. Timing is everything, and although it was not the right time then for Cary and Marianne to sell, I continued to stay in touch and build a friendship over the past 4 years. They hired me and our firm to sell their dealership after almost 30 successful years. Having helped Rami Yanni acquire a Harley-Davidson dealership in the past, I knew he would be the perfect buyer and it proved to be a great match. I wish Cary and Marianne the best in their future endeavors, and I look forward to helping Rami and the Wise Auto Group continue to acquire more Harley-Davidson dealerships in the near future!”

The dealership will be renamed Death Valley Harley-Davidson and will remain at its current location 14522 Valley Center Dr. Victorville, California.