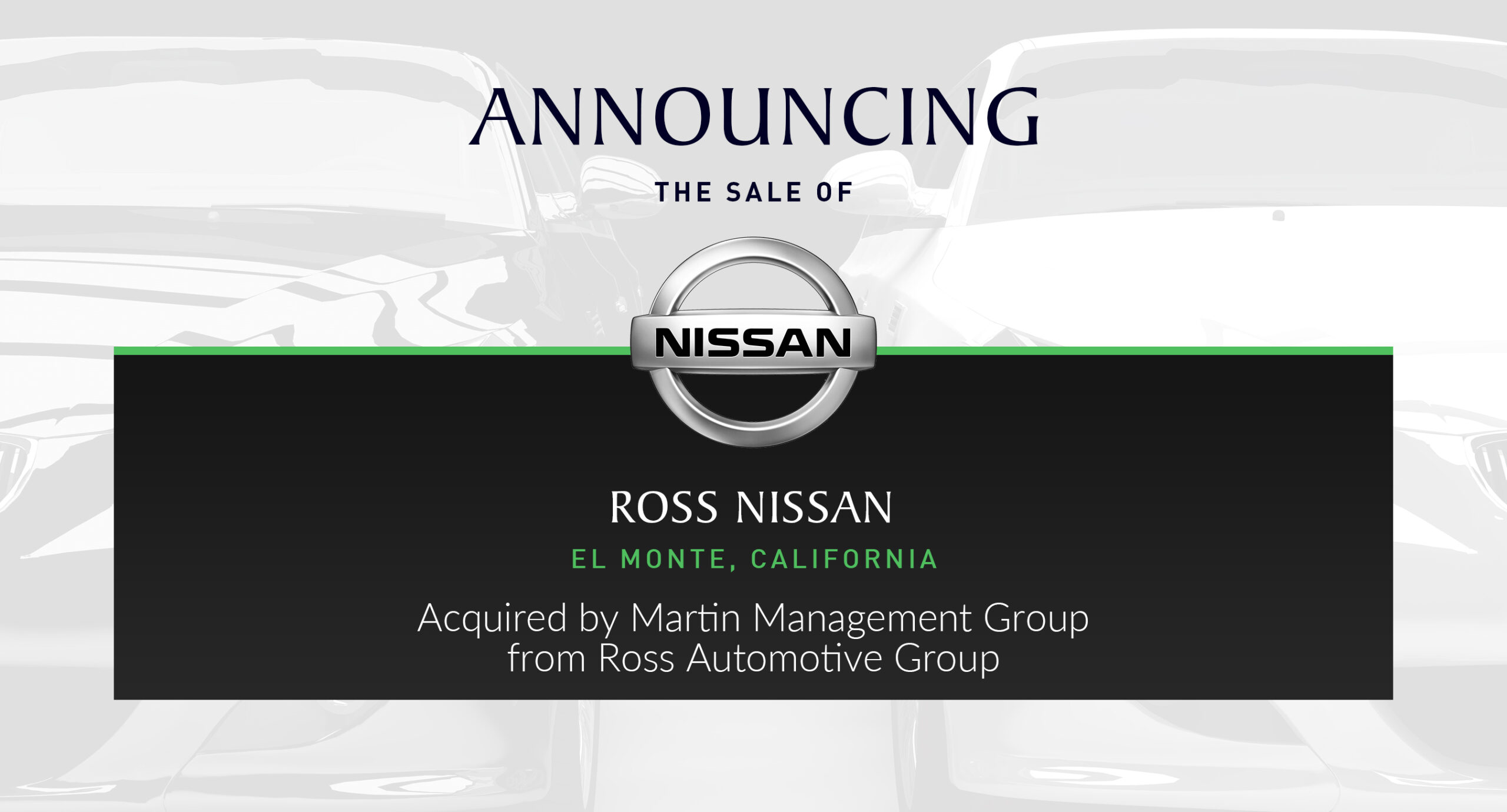 Performance Brokerage Services, the leading automotive brokerage firm, is pleased to announce the sale of Ross Nissan of El Monte in California from Ross Automotive Group to Martin Management Group.

Ross Automotive Group was founded in 1979 by President, Jim Ross. The automotive group has three dealerships in Southern California, including Ross Ford of Montebello, Covina Hills Chevrolet, and Chevrolet of Puente Hills. Following the sale, Ross commented, “From the first call I made to Jason Stopnitzky, I knew we had a connection. Once we put the deal on paper, he actually worked the deal, and made it all come together the way I thought it should. It’s people like Jason that make this world a better place. Thank you to Jason and his team at Performance Brokerage Services for making this a great situation on my end, and a great deal for the buyer with this Nissan franchise. I appreciate all they did to put this deal together and I would recommend them to anyone who wants to sell their franchise.”

Over the last 5 years, Performance Brokerage Services has represented for sale over 200 automotive dealerships, making it the highest volume automotive dealership brokerage firm in North America. Jason Stopnitzky, the exclusive agent for this transaction and Co-Founder of Performance Brokerage Services commented, “Transactions of this magnitude are complex by nature. Both principals managed to make the process seamless, and frankly, enjoyable. It was a privilege to represent Mr. Ross, who has been in the industry for more than 40 years and built a terrific reputation. Both gentlemen were an absolute pleasure to work with.”

Martin Management Group was founded in 1985 by Cornelius A. Martin. The company’s first dealership was Oldsmobile Cadillac in Bowling Green, Kentucky. The company has since expanded into Ohio, West Virginia, South Carolina, California, and Tennessee, offering multiple automotive franchises, as well as Harley-Davidson.  Martin Management Group has consistently been ranked in the Automotive News Top-125 Dealership Groups and recognized by Black Enterprise Magazine in its annual Top-100 Minority Dealers in the Nation.

Chad Martin, President of Martin Management Group, commented the following on the transaction, “Our group had a great experience with Performance Brokerage Services. Jason Stopnitzky and his team know the automotive market extremely well. From the dealers, to the OEMs, to the attorneys, this is an extremely well respected brokerage firm that goes above and beyond to communicate and get deals closed quickly and accurately. In a business where time is of short supply, the high level of service offered is greatly appreciated.”

The dealership will remain at its current location at 3428 Peck Road in El Monte, California 91731.

Representing Ross Automotive Group in this transaction was Brent Smith, and representing Martin Management Group was Timothy Robinett, both of Manning, Leaver, Bruder & Berberich based in Los Angeles, California.