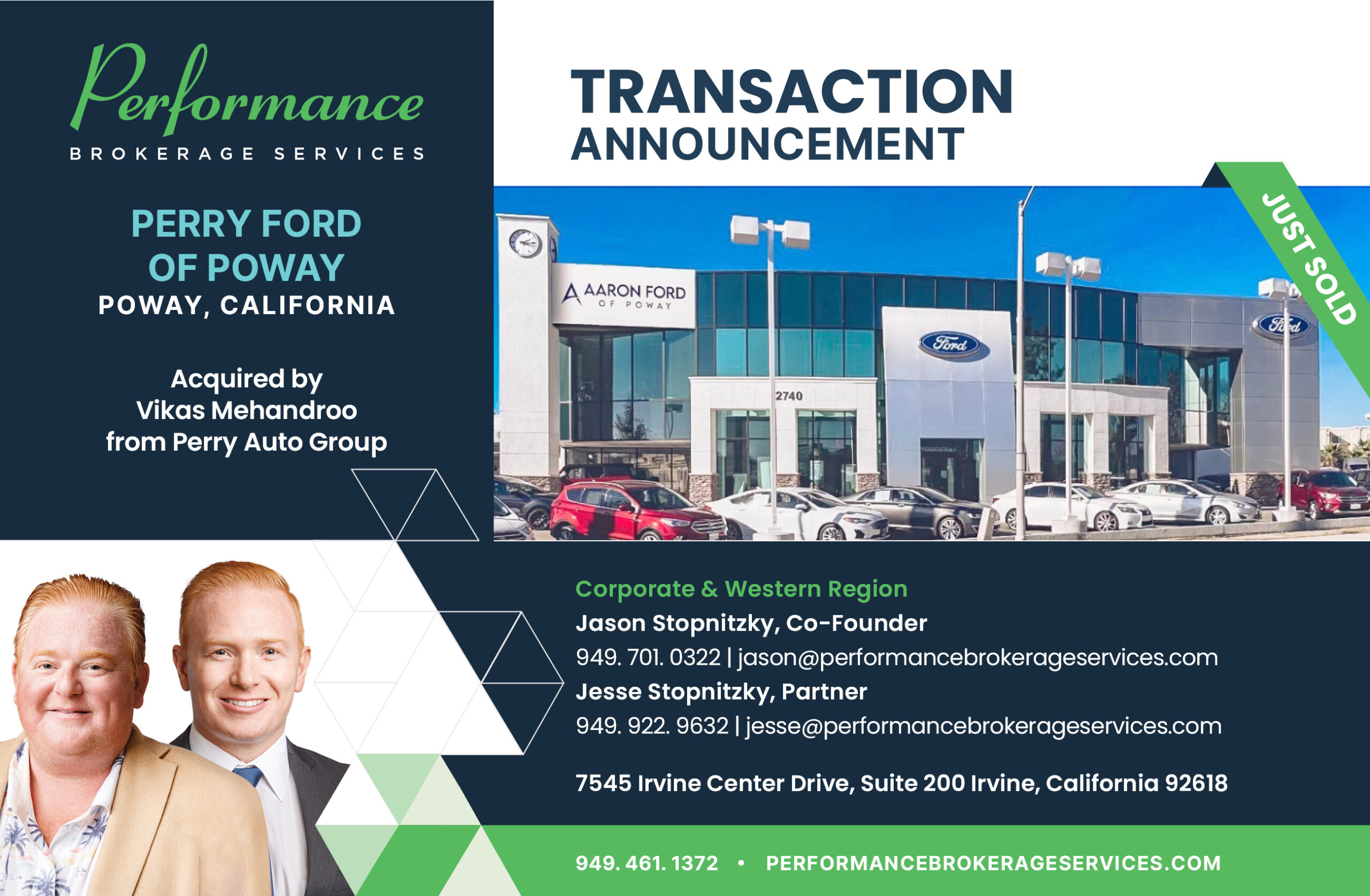 Perry Ford of Poway was purchased by Perry Automotive Group in 1996. As long-time Ford dealers in Central California, Co-Owner, Perry Falk, acquired the Poway location and relocated his family to San Diego. The group consists of Perry CDJR and Perry Ford of National City, Perry Ford Lincoln and Perry Volkswagen of San Luis Obispo, and Perry Ford of Santa Barbara.

Following the sale, Co-Owner, Deborah Falk, commented, “Selling a family business is hard enough, but selling a split-family business is extra difficult. Jason Stopnitzky of Performance Brokerage Services was a great intermediary for us and was very respectful of my interests. He listens to what you want and he finds the deal to make it happen. He exceeded my expectations.”

Over the last 5 years, Performance Brokerage Services has advised on the sale of over 250 dealerships, making it the highest volume dealership brokerage firm in North America. In 2021, the company expects to consummate over 70 transactions, marking a record-breaking year. Jason Stopnitzky, the exclusive agent for this transaction and Co-Founder of Performance Brokerage Services commented, “We have known Perry Falk for over 2 decades, as he built a legacy under the Ford umbrella. It has been an honor to represent Perry and Deborah Falk in this transaction. We wish Vikas Mehandroo much success with his first store and have no doubt that this is just the beginning for him. He does what he says and says what he means. It was a pleasure getting to know him through this process and we look forward to working with him again in the future.”

Vikas Mehandroo came to the United States 21 years ago and was introduced to the automotive industry as a salesman. He quickly realized that it wasn’t only about the cars, but about serving the people. After selling cars for nine months, he was promoted to finance manager where he stayed for the next 4 years, until he became General Manager. Over the course of 12 years, Vikas served as General Manager for multiple dealerships and franchises including Toyota, Infiniti, CDJR, Nissan, and Ford. Vikas decided he was ready for the next chapter in his career, and in February 2021, made a commitment to himself that he would be a dealer principal by the end of the year. Vikas teamed up with Performance Brokerage Services, and ultimately made that dream a reality. Vikas commented, “It all started 10 months ago with a simple phone call to Performance Brokerage Services. The fact that Jason and Jesse Stopnitzky spent 50 minutes on the first phone call with a first-time purchaser told me they are the only people to do business with.”

When Performance Brokerage showed Vikas the Ford dealership in Poway, Vikas claimed it was “love at first sight”. He added, “Ford is the greatest OEM, with a fantastic Minority Owner’s Program.”

Following the acquisition, Vikas commented, “Jason Stopnitzky has been a guide, a friend, a mentor, and above all an inspiration to never give up. From day one, Jason always made me feel at home and never made me realize this was my first deal. There are a lot of people in the market who will make you a deal, but only Performance Brokerage Services will take care of you like their own. I owe it to Jason for my first store, there is no way that I could have done it without him.”

The dealership will remain at its current location at 12740 Poway Road in Poway, California and will be renamed Aaron Ford of Poway, named after Vikas’ son. Vikas shared his goal of building a foundation on strong customer service stating, “We will take care of the people. We want to do it right and do it differently.”