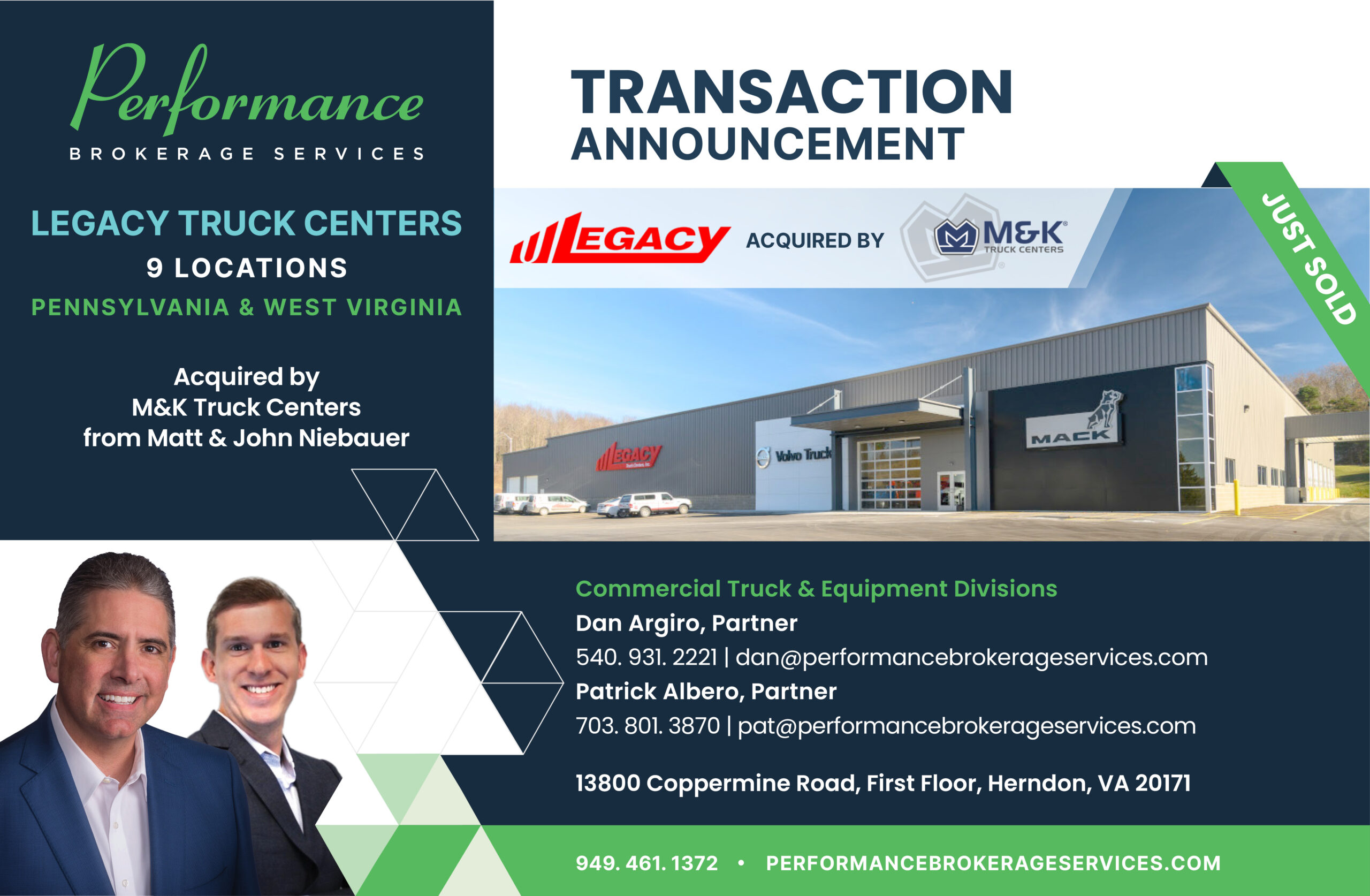 Matt and John Niebauer began working at their father’s company, W.W. Engine Supply, when they were just teenagers. In 2015, they purchased the business from their father and established Legacy Truck Centers. Matt served as President while John served as Vice President, and were both instrumental in the growth of the company.

The sale included 9 dealership locations in Pennsylvania and West Virginia, an online parts store, and a Fire & Rescue Products (FRP) company that operates out of the Harrisburg location.

Following the sale, Matt Niebauer commented, “Buying and selling a dealership is a complex process, and finding the right buyer, at the right price, is even more difficult. I reached out to Dan Argiro at Performance Brokerage Services when my brother, John, and I were considering selling our dealer group. I liked that Dan specialized in Commercial Truck Dealerships and wanted to learn more about the process. We eventually hired Dan and Performance, and they did not let us down. Dan always did what he said and came through in the end. He was always available and in constant communication. Dan helped guide us through the entire process; from collecting the best data to value our business, to meeting and negotiating with potential buyers, through the closing, and still continues to follow up weeks later. He lived up to his promise about bringing an honorable and trustworthy buyer to continue the legacy of our dealer group. Along with your attorney and CPA, Dan is the type of broker you want to have on your team if you are buying or selling a dealership. We certainly recommend Dan Argiro and Performance Brokerage Services.  Thanks to Dan, I’m now enjoying great days with M&K!”

Over the last 5 years, Performance Brokerage Services has advised on the sale of over 250 dealerships, making it the highest volume dealership brokerage firm in North America. In 2021, the company consummated over 72 transactions, marking a record-breaking year. Dan Argiro, the exclusive agent for this transaction and head of the Commercial Truck Division for Performance Brokerage Services commented, “It was an honor to work with Matt and John Niebauer on the sale of Legacy Truck Centers to Ron Meyering at M&K Truck Centers. Each transaction is unique in its own way, but this one was a little extra special. I’m originally from Western Pennsylvania and have driven past a few Legacy locations for years. The fact that I was able to play a part in advising Matt and John on the sale to M&K is something my family and I can be proud of as I drive past the new M&K locations in the years ahead. Legacy has a fantastic reputation in the areas they service, and the sale to Ron Meyering and his team at M&K will only enhance that reputation. It’s truly fulfilling to know Matt and John Niebauer can capitalize on the work they’ve done in the company since they were teenagers.”

According to their website, M&K Truck Centers is a full-service dealer of new and used heavy-duty and medium-duty trucks, trailers, and luxury sport coaches. The organization’s comprehensive service offerings include financing, leasing and rental services as a member of NationaLease, service and repair on all makes and models with over 350 service stalls, and one of the industry’s largest parts inventories.

The acquisition expands the company’s footprint to 29 locations across five states including Michigan, Indiana, Illinois, Pennsylvania and West Virginia. The expansion throughout the state of Pennsylvania plus West Virginia will create a network of locations for customers traveling across the major I80, I90, I76 and I70 corridors between most major cities on the East Coast and the upper Midwest.

Ron Meyering, CEO of M&K Truck Centers, commented the following, “It was a pleasure working with Dan Argiro and Performance Brokerage Services. Dan was instrumental when it came to the acquisition of Legacy Truck Centers. His professionalism, integrity, and honesty were second to none. Dan is the gentleman you want to have in your corner if you are looking for an acquisition or want to find a good buyer for your dealership. I look forward to working with Dan and Performance on future acquisitions.”