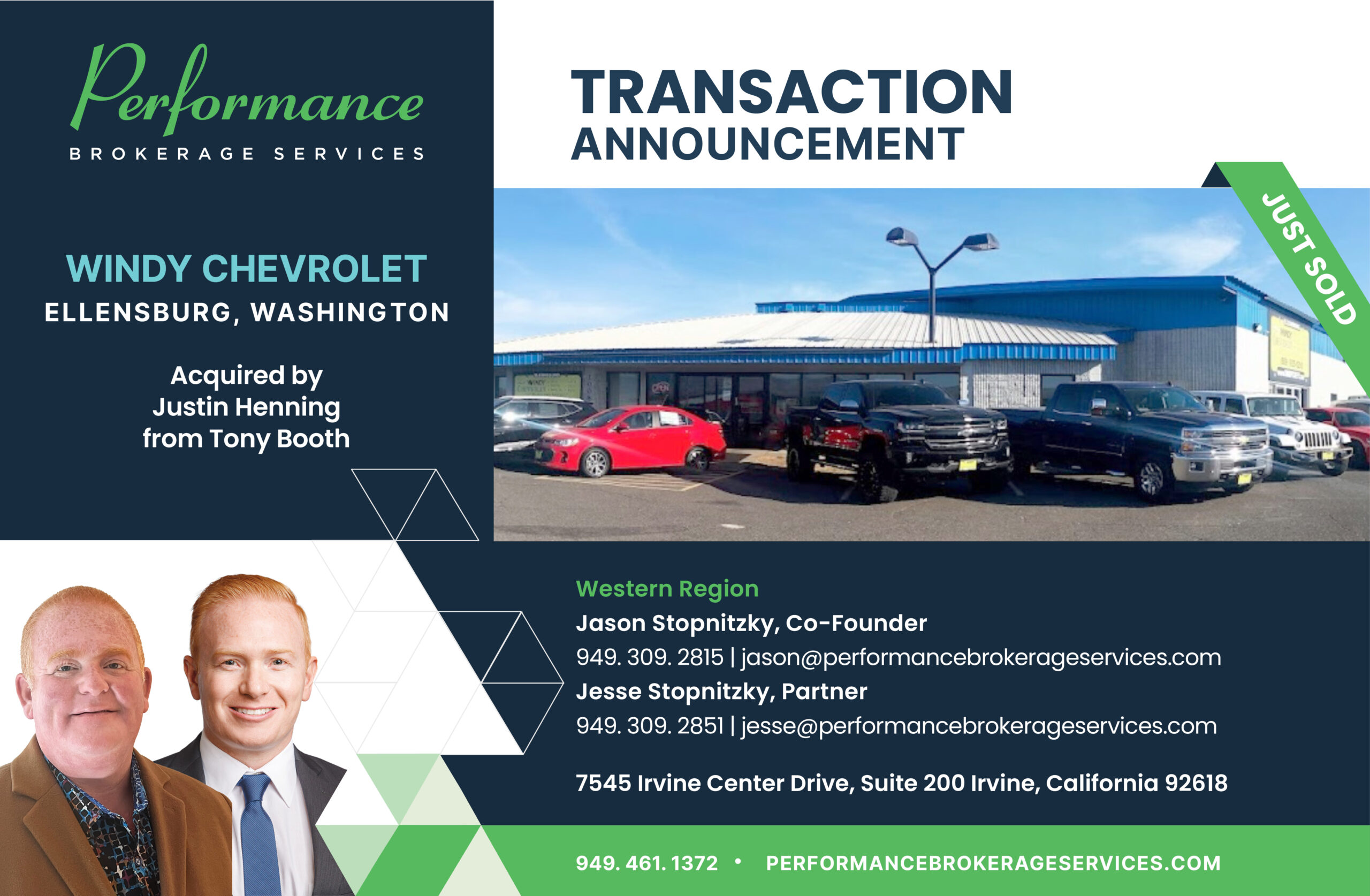 Windy Chevrolet was established as a dealership in the late 1950’s and was acquired by Tony Booth in 2015. Booth, who has owned and operated dealerships in Washington State for nearly 30 years, has plans to relocate his family and rebuild the Windy Auto Group in the state of Oklahoma. Booth currently owns 3 dealerships in Purcell, Alva, and Elk City, Oklahoma, representing Chevrolet, Nissan, Ford, and Lincoln.

Following the sale, Booth commented, “It was truly a pleasure working with Jason Stopnitzky of Performance Brokerage Services on the sale of my last dealership in Washington State. His dedication and commitment to excellence went above and beyond. The long, late phone calls and our friendship for over 20 years has been incredible. I can assure you that he made this deal happen and I’m very excited for Justin Henning and his future in Ellensburg. I would highly recommend Performance Brokerage anytime; they have my fullest endorsement I can offer.”

Over the last 5 years, Performance Brokerage Services has advised on the sale of over 250 dealerships, making it the highest volume dealership brokerage firm in North America. In 2021, the company consummated 72 transactions, marking a record-breaking year. Jason Stopnitzky, the exclusive agent for this transaction and the Co-Founder of Performance Brokerage Services commented, “Tony Booth has been a pillar in the eastern Washington community for many years and has amassed an impressive dealership portfolio. It was an honor and a privilege to help him sell his last remaining store in Washington. I wish him much success on his next chapter in Oklahoma. It was a pleasure working with Justin Henning during this transaction, he is a true ‘car guy’. He worked his way up from selling cars in college to now owning 3 dealerships in the state of Washington. I know that Justin has big plans, and I have no doubt that he will be very successful.”

This acquisition marks the second Chevrolet dealership for Justin Henning, who also owns Chevrolet and Nissan of Walla Walla. Additionally, Henning is a partner in an RV dealership group, with four locations in Washington.

Upon the closing, Henning shared, “From the 5am phone calls to the 11pm calls, I am very grateful to Jason Stopnitzky of Performance Brokerage Services for getting the deal done. I met Jason as a broker, and he became a friend. Jason did whatever it took to get the deal across the finish line. I want to thank Jason and the Performance Brokerage team for helping me get my second Chevrolet dealership in Washington. I am very excited about my new acquisition.”

The dealership will remain at its current location at 1008 Canyon Road in Ellensburg, Washington.