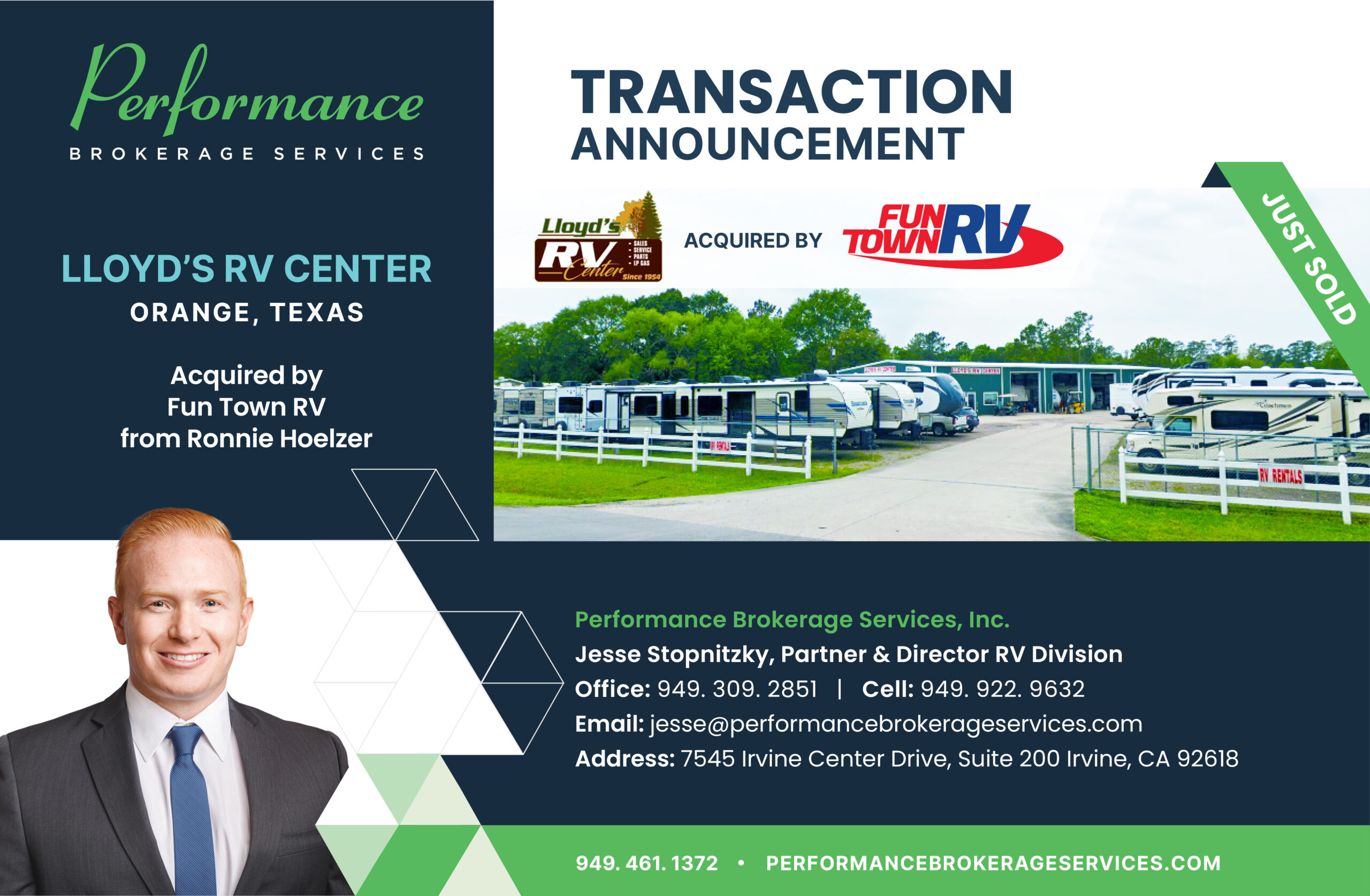 Lloyd’s RV Center in Orange, Texas was established by Lloyd Hoelzer in 1954. Lloyd’s son, Ronnie Hoelzer, eventually took over the business and relocated it to its current location at 7415 Highway 62 North.

Ronnie Hoelzer, President of Lloyd’s RV Center, stated, “When I first made the call to Jesse Stopnitzky and Performance Brokerage Services, I was unsure of the process. As I began to see Jesse operate and experienced his quality of service, I became much more relaxed, which I appreciated so much. I had no idea the problems that would crop up, and Jesse did all he could do to help resolve them. I could not have done this by myself. His service was excellent and he was invaluable to me. If you are considering selling a dealership, I highly recommend the team at Performance Brokerage Services.”

Over the last 5 years, Performance Brokerage Services has advised on the sale of over 250 dealerships, making it the highest volume dealership brokerage firm in North America. In 2021, the company consummated 72 transactions, marking a record-breaking year. Jesse Stopnitzky, the exclusive agent for this transaction and the Director of the RV Division for Performance Brokerage Services commented, “Ronnie Hoelzer was a trailblazer in the RV industry in Texas. He was in part responsible for the foundation of the Texas RV Dealer Association, and the first to serve as President from 1973-1974. Nearly 50 years later, he is still the acting Vice-President of the TRVDA. Ronnie’s commitment to his fellow dealers and his community is what makes him special. It was a pleasure and an honor representing the Hoelzer family legacy as Ronnie and his wife, Peggy, transition to the next chapter in their lives. With the utmost respect for all that he has contributed to the industry, I am grateful for his trust and his friendship. I wish Ronnie the enjoyable and relaxing retirement that he deserves.”

In 2021, Fun Town RV ranked #1 as the highest volume towable RV retailer in the nation. With 12 locations in Texas, one in Oklahoma and another in Illinois, Fun Town RV plans to grow by as much as another 15 locations in the next 2-3 years.

Jarrod McGhee, Founder & CEO of Fun Town RV, commented, “Jesse Stopnitzky and the crew at Performance Brokerage Services were outstanding to work with on the purchase of my new location in Orange, Texas. I found them to be prompt, forthright, and an all-around pleasure to work with. I certainly would not hesitate to do business with them again in the future. They made the entire process as painless as possible.”

McGhee continued, “It’s been a great start to the year. We have some exciting things happening now and in the future, and there are all sorts of room for advancement and opportunities within Fun Town RV, all because of our new growth. This location will be among several new stores that are scheduled to open within the next year for Fun Town RV.”