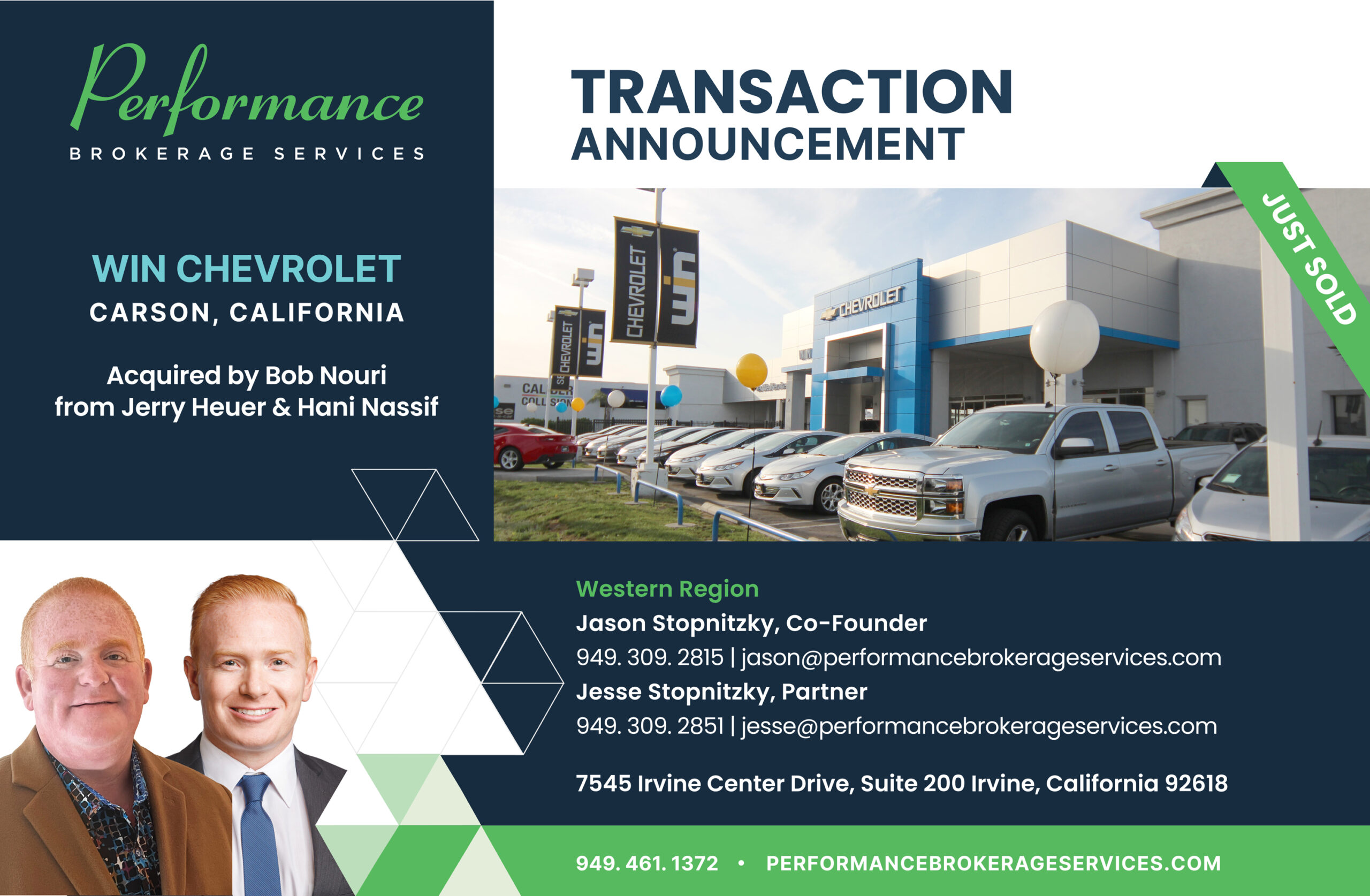 Jerry Heuer and Hani Nassif, both veterans in the automobile industry, have been friends for many years. Heuer, former President of Bill Adkins’ Southern California Auto Group, stayed onboard after the company was acquired by AutoNation in 1998 and continued to manage nearly 60 dealerships for the retail giant. In 2010, after the Great Recession, Heuer and Nassif partnered up to revive the Chevrolet dealership in Carson, California. They later added Hyundai to the 10-acre campus that sits right along the 405 Freeway in the heart of the city. The partners continued to invest in the business and built state-of-the-art facilities for both dealerships. They were able to transform a shuttered Chevrolet facility into a thriving dealership that generated nearly $250 million in revenue, selling nearly 5,000 retail units annually.

The Chevrolet dealership was acquired by dealers Bob Nouri and Pete Shaver, who are actively growing their dealer group, with plans to establish the Nouri/Shaver Automotive Group. The Chevrolet dealership will be led by Nouri, Shaver, and their newly appointed CEO, Armina Mgerian. This acquisition marks Nouri and Shaver’s 15th dealership. In 2021, the duo sold approximately 40,000 new and used vehicles, generating $1.75 billion in revenue.

Following the sale, Heuer commented “After closing on the sale of our Win Chevrolet and Win Hyundai dealerships, I can’t say enough about the added value that Jason Stopnitzky of Performance Brokerage Services brought to the table. From finding the perfect buyer, to his ability to shepherd the very complicated deal to a closing. In an age where truth, honesty, and integrity are often bent, Jason has demonstrated that character is not lost. It’s not often that people do exactly what they say. Bob Nouri is also absolutely a man of his word, and his organization was a delight to work with. With deep gratitude, I thank you both, and I pray that you have incredible success in the future.”

Over the last 5 years, Performance Brokerage Services has advised on the sale of over 300 dealerships, making it the highest volume dealership brokerage firm in North America. In 2021, the company consummated 72 transactions, and is pacing over 100 transactions for 2022, marking a record-breaking year. Jason Stopnitzky, the exclusive agent for this transaction and the Co-Founder of Performance Brokerage Services commented, “After more than 24 years of helping my friends buy and sell dealerships, this one will always hold a special place in my heart. It was an honor to be a part of a true legacy transition and passing of the torch. I was blown away watching these parties in action, and the hard work and dedication they displayed to get this deal to the finish line. The Nouri/Shaver organization is beyond impressive, and I am confident that we are witnessing one of California’s biggest Chevrolet dealerships in the making. I consider Jerry and Hani to be legends in the automotive industry, and I am grateful for the opportunity to have helped them through this monumental event in their lives.”

Nouri shared, “Jason Stopnitzky of Performance Brokerage Services is not only the best broker I have ever done business with, but also one of the best human beings I have ever met. He is genuine, honest, and hard working. It has been an absolute pleasure to work with him through my acquisition of Win Chevrolet. He made every step of the transaction as easy as humanly possible. If there was a way to give him more than five stars I would, as he honestly deserves millions.”

The dealership has been renamed Carson Chevrolet.