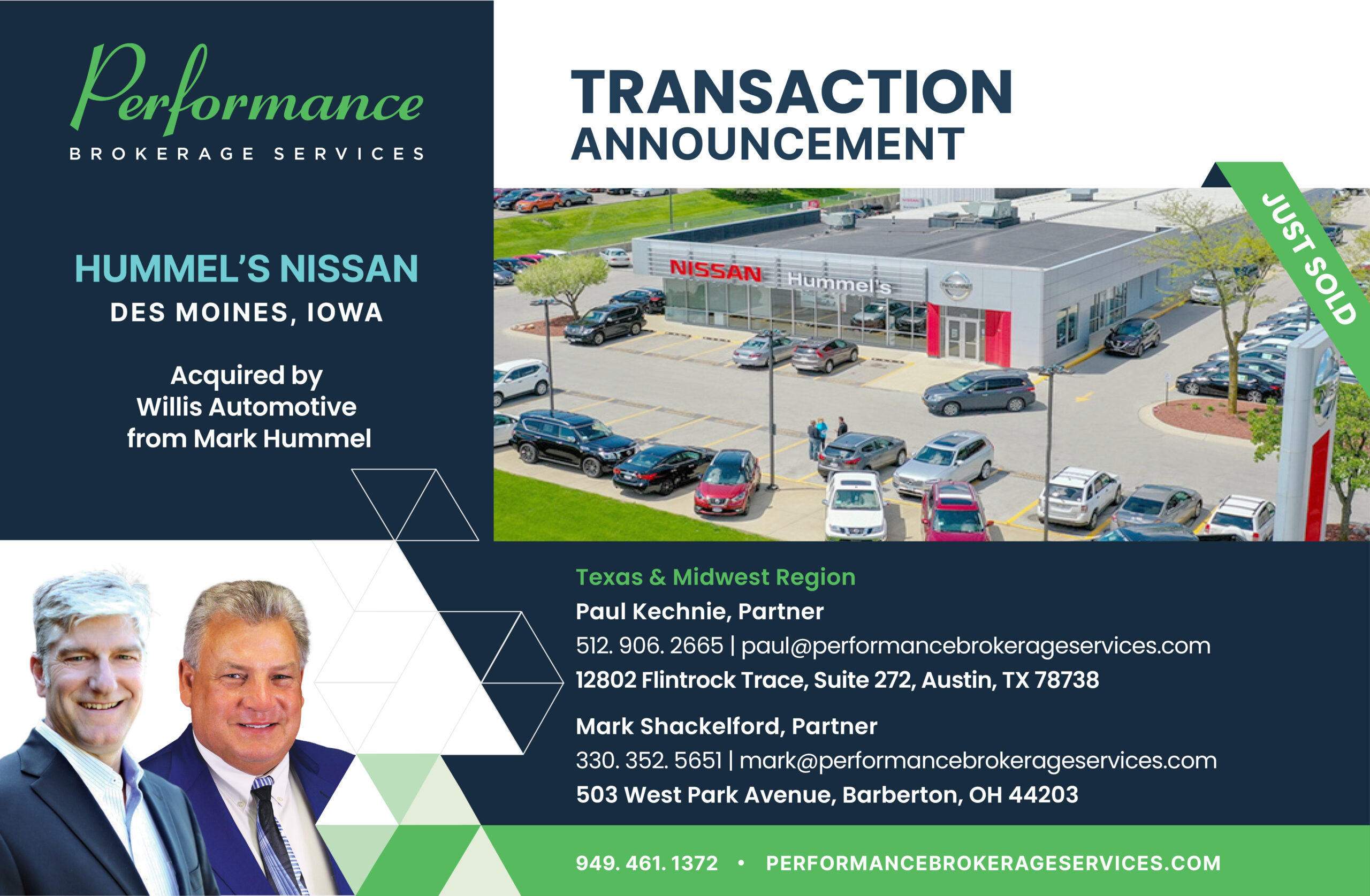 Hummel’s Nissan proudly claims the title of Iowa’s #1 Nissan dealer. Established in 1929 by Henry Hummel, the dealership remained family-owned and operated for more than 90 years while serving central Iowa. In 2021, Hummel’s Nissan was the recipient of the Award of Excellence, awarded each year to the top 10 percent of Nissan dealerships for customer satisfaction and sales volume.

Third-generation owner, Mark Hummel, shared, “Paul Kechnie of Performance Brokerage Services was instrumental in getting the deal to the finish line. He was able to provide detailed insight as to what would be expected. Through the selling process, he was attentive, responsive, and always available.  I am very happy with the transaction and services provided by Paul and Performance Brokerage Services.”

Over the last 5 years, Performance Brokerage Services has advised on the sale of over 250 dealerships, making it the highest volume dealership brokerage firm in North America. In 2021, the company consummated 72 transactions, marking a record-breaking year. Paul Kechnie, the exclusive agent for this transaction and the Midwest Partner for Performance Brokerage Services commented, “Having done business with the Willis family in the past, I was very pleased when they approached me to help facilitate another transaction. After getting to know Mark Hummel, it was very clear that these two families would align; they both place a strong emphasis on ethical and moral standards. Due to the nature of both parties, this became one of the easiest transactions I’ve had the pleasure to be involved with. I am very excited for the Willis family and their new venture, and would like to congratulate the Hummel family on their well-deserved retirement.”

Celebrating their 75th Year Anniversary, Willis Automotive is a family-owned and locally operated dealership group that centers their business around faith, family and community.

Jason Willis, CEO of Willis Automotive, commented, “This is the second acquisition that Paul Kechnie of Performance Brokerage Services assisted us with, and he helped make the process as smooth as possible both times. As challenges came up, he helped both sides work through them. Paul is honest, has a great deal of knowledge, and responds quickly. Paul knows how important our culture is to us and made sure that the opportunity fit our core values.”

The dealership will remain at its current location at 4770 Merle Hay Road in Des Moines, Iowa and has been renamed Willis Nissan.

The dealership welcomes the 104 Nissan employees.