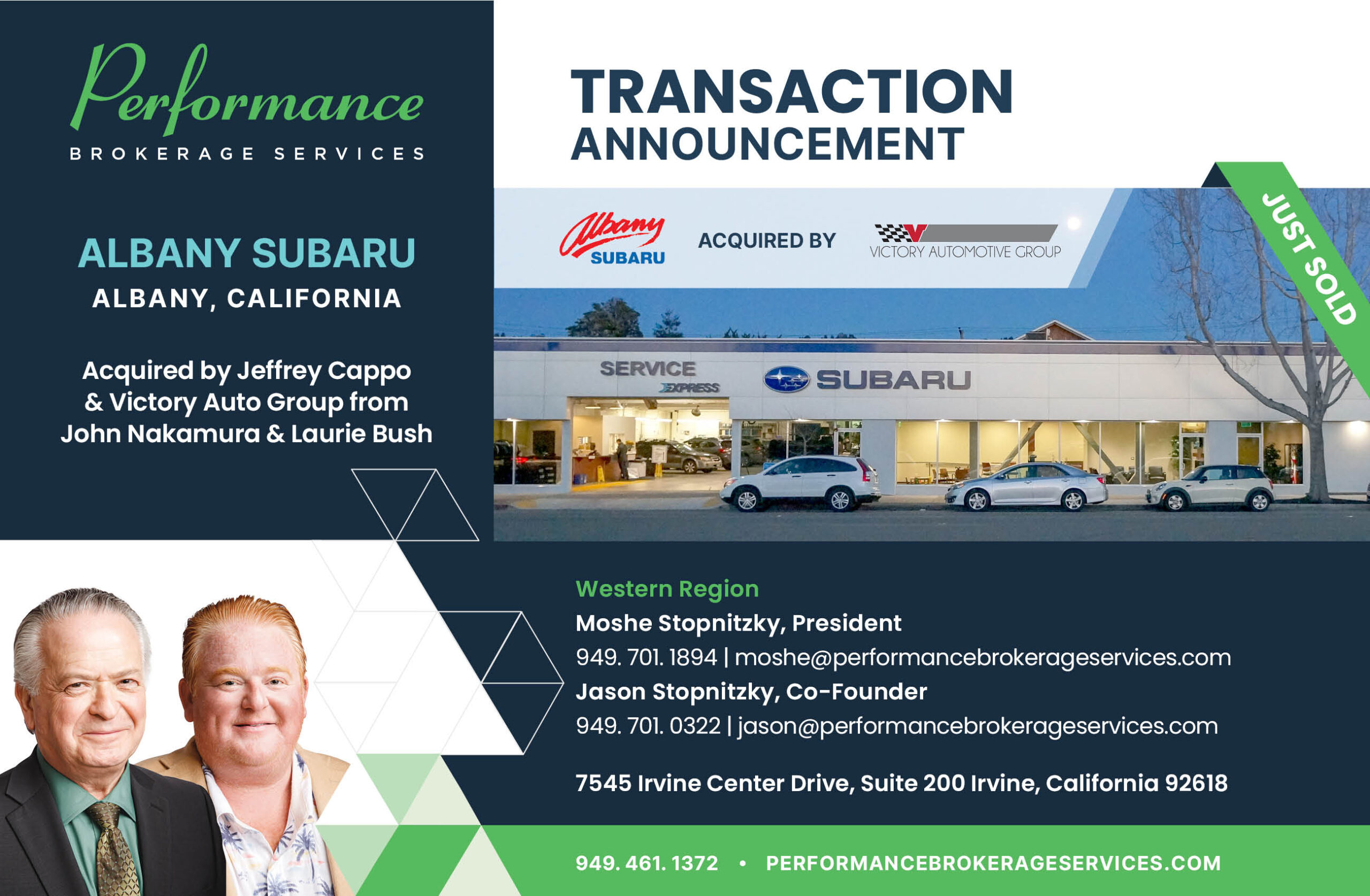 Albany Subaru was established in 1992. President, John Nakamura, and his Partner, Laurie Bush, have always had very active roles in the dealership operations, with John serving as General Manager and Laurie as CFO. Albany Subaru has been an extraordinarily active member of the community since inception and has become recognized as a key civic contributor to local charities and schools. Albany Subaru is the premier sponsor of the annual Solano Avenue Stroll and a founding patron and major contributor to the Infusion Center at Stanford Cancer Center ITA nurses. John Nakamura’s constant commitment to his community led him to be recognized as “Albany Citizen of the Year” by the Chamber of Commerce and California State Assembly in 2012.

Nakamura stated, “Our dealership was and always is our baby. To say that we were a picky seller is an understatement. There were so many qualitative elements to our deal, such as our valued employees, our relationships with our business partners, and the very important element of winning on both sides of the table for both buyer and seller.”

Nakamura continued, “Moshe, Jason, and Jesse Stopnitzky of Performance Brokerage Services listened first, then leveraged their many years of experience and connections within the industry to find us the perfect match who was willing to honor our commitments to our employees, our customers, and our community. They never gave up or asked that we compromise our wishes. Instead, they worked tirelessly to make our request a reality. Both my partner, Laurie Bush, and myself, will not hesitate recommending Performance and their team of trusted counselors. Simply put, they are by far the best at what they do, and more importantly, how they do it.”

Over the last 5 years, Performance Brokerage Services has advised on the sale of over 250 dealerships, making it the highest volume dealership brokerage firm in North America. In 2021, the company expects to consummate over 70 transactions, marking a record-breaking year. Moshe Stopnitzky, President of Performance Brokerage Services, commented, “This was an exceptional project for us. Albany Subaru is a special dealership, owned and managed by very special people. The buyer will benefit from a tremendous goodwill built over nearly 3 decades by John Nakamura and Laurie Bush. Goodwill with the employees, customers, and with the community. We are very excited to have been part of this transaction.”

Headquartered in Canton, Michigan, Victory Automotive Group was established by current Owner and President, Jeffrey Cappo, who acquired his first dealership in 1997 with the purchase of a small Nissan store in Morristown, Tennessee. Over the next 24 years, the group expanded its footprint across nine states, representing some of the most desirable brands in the industry. This acquisition marks the 45th dealership location for Victory Automotive Group, who ranks as one of the Top-15 dealer groups in the U.S., selling nearly 60,000 retail units annually. This is the group’s second Subaru dealership in California. Though the group has grown dramatically, it continues to operate as a family business, with Cappo’s sons, Eric and Michael, also involved in the daily operations, and Cappo on the sales floor daily taking care of customers.

Jeffrey Cappo commented, “Moshe and Jason Stopnitzky of Performance Brokerage Services are not looking for a sale like a broker, they are looking for a customer they can help to make an educated transaction. Their honesty, integrity and attention to detail are second to none. After doing several deals with them, they only do deals one way, and that is a win for the buyer as well as a win for the seller. I would recommend them to anyone looking to buy or sell a car dealership.”

Jason Stopnitzky, Co-Founder of Performance Brokerage Services, echoed Cappo’s sentiment, stating, “This marks our sixth transaction with the Victory Automotive Group. We have been a growth partner of theirs for years. The entire Cappo family and leadership team are first-class and a pleasure to do business with. We look forward to our continued relationship with them and hope to have another transaction on the horizon soon.”

The dealership will remain at its current location at 718 San Pablo Avenue in Albany, California.