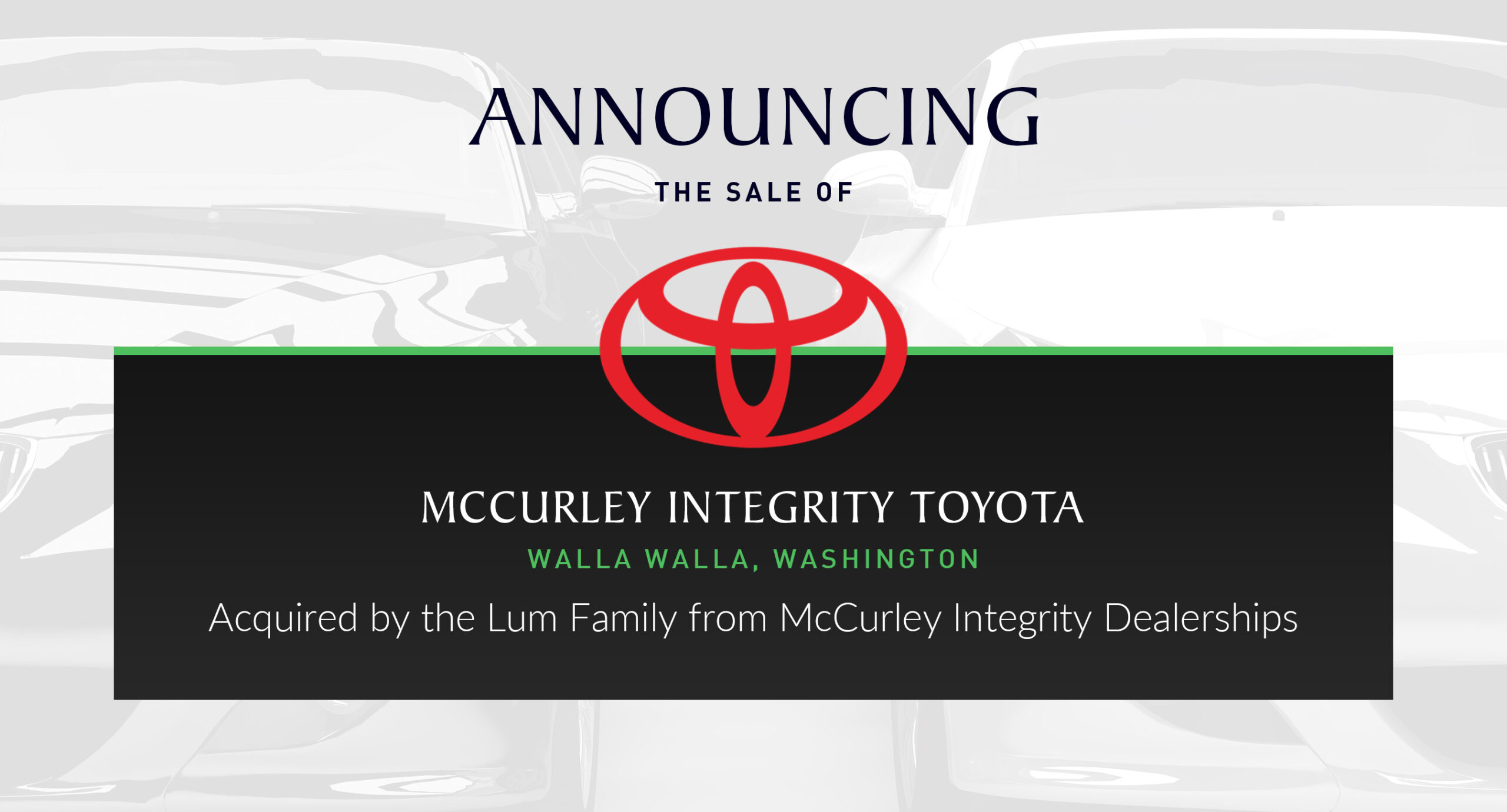 McCurley Integrity Dealerships was founded in 1981 by Bill McCurley. The company has 5 stores in the state of Washington, with locations in each of the Tri-Cities, and offers 7 brands. The company believes in being a part of their local communities and participates in numerous charitable events. For the past 19 years, they have organized an annual Octoberfest that raises donations for the local food banks during the holiday season. Bill’s son, Mason McCurley, President of McCurley Integrity Dealerships, commented, “We highly recommend Jesse Stopnitzky and the team at Performance Brokerage Services. They were amazing. Everything they said would happen, did! It was three great family business, working together with alighted goals.  I couldn’t be happier.  The trust that was built so quickly allowed for the deal to go very smoothly.”

Over the last 5 years, Performance Brokerage Services has represented for sale over 200 automotive dealerships making it the highest volume automotive dealership brokerage firm in North America. Jesse Stopnitzky, the exclusive agent for this transaction and a Partner of Performance Brokerage Services commented, “we would like to thank McCurley Integrity Dealerships for entrusting us with the sale of their Toyota dealership in Walla Walla. Working with two first-class and highly ethical organizations, the transaction was smooth, quick and remained confidential through the closing. It was important that we found a buyer who shared a similar philosophy of supporting and enhancing their communities. We wish the Lum Family great success with their acquisition.”

The Lum Family has owned and operated dealerships for over 50 years. David Lum opened the family’s first dealership in 1969 in his hometown of Astoria, Oregon. The store was originally Toyota of Astoria, but has since moved 6 miles to Warrenton and renamed Lum’s Auto Center, offering Toyota, Chrysler, Dodge, Jeep and Ram. They added another store in 2018, again with the help of Performance Brokerage Services, with the purchase of Lum’s Buick GMC Cadillac in McMinnville, Oregon. Lori Lum commented, “This was our second opportunity to work with such a fine organization. The transition was seamless. Jesse Stopnitzky was beyond helpful and always available for assistance. He was able to answer all questions in a timely fashion. We highly recommend the work done by Jesse and his team at Performance Brokerage Services.”

The Lum Family has remained active in their Astoria community by supporting various non-profit organizations and serving on boards across Clatsop County. The dealerships are now under the leadership of David and his wife Shirley’s three daughters Lori, Julie, and Pam.

Lori Lum commented the following on the sale, “We are very excited about our newest adventure in Walla Walla, Washington. We knew being part of such a great community with employees who are embedded in the area, was a no brainer. We look forward to growing with Walla Walla.”

The recently acquired dealership will remain at its current location at 606 North Wilbur Avenue in Walla Walla, Washington 99362 and be renamed Walla Walla Toyota. Justin Teubner, former General Sales Manager at Lum’s Auto Center of Warrenton, is now a Partner and General Manager for Toyota of Walla Walla.

Representing the Lum Family in this transaction were Craig Nichols and his son, Geoff Nichols, of Nichols Law Group, LLC based in Portland, Oregon.

Representing the McCurley Integrity Dealerships in this transaction was Jim Aiken of Aiken Law Group based in Issaquah, Washington.+