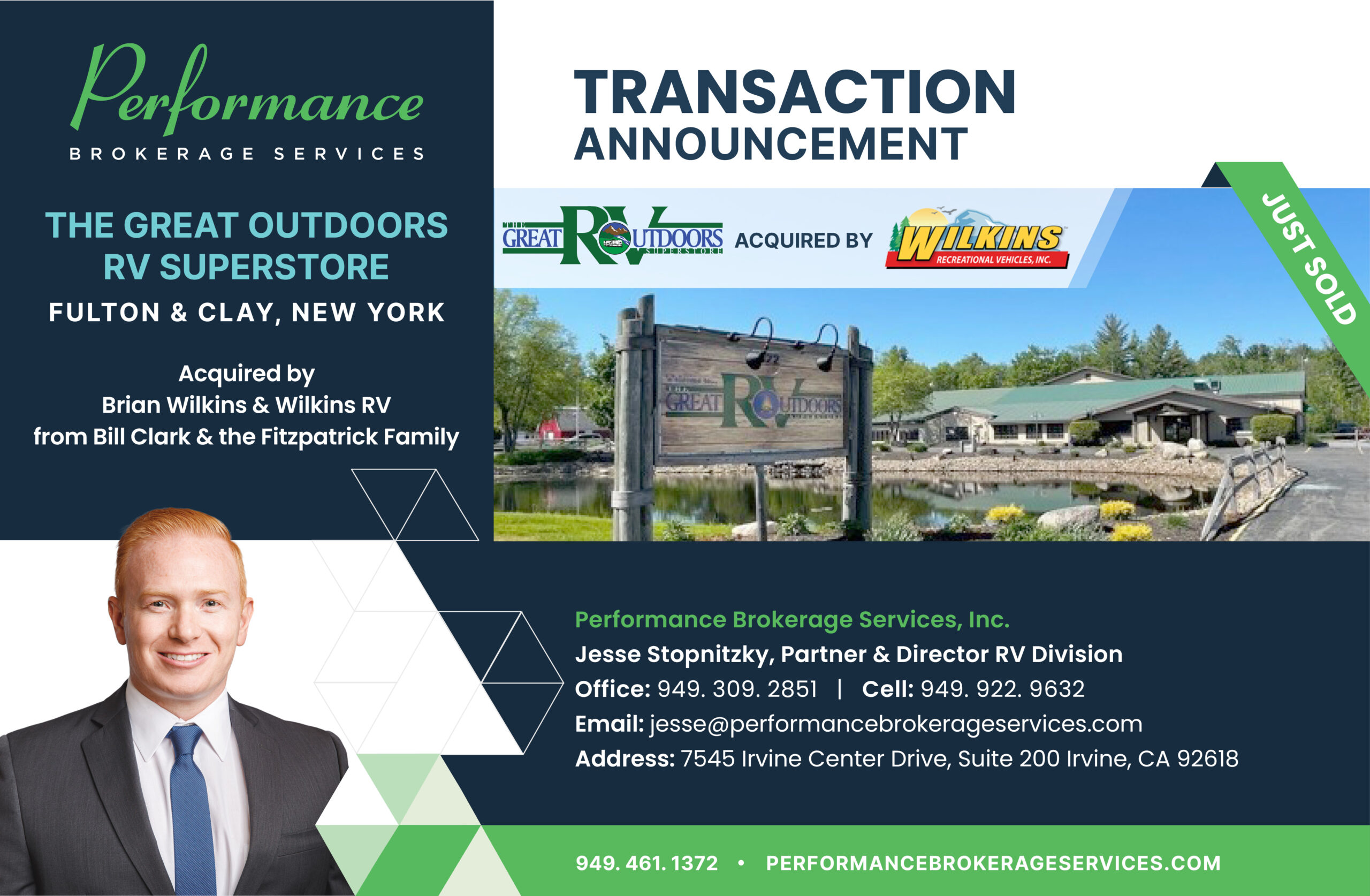 Performance Brokerage Services, North America’s highest volume dealership brokerage firm, is pleased to announce the sale of The Great Outdoors RV Superstore from Bill Clark and the Fitzpatrick Family to Brian Wilkins and Wilkins RV. The acquisition includes 2 dealership locations in Fulton and Clay, New York and expands Wilkins RV’s portfolio to 6 dealerships. The transaction was completed on November 3.

The Great Outdoors RV Superstore was established in 1988 in Fulton, New York by Bill Clark and his late business partner, Jerry Fitzpatrick. Together, they served Central New York’s RV community for over 33 years. The Fulton location is on 25 acres and is the home of Campers Village, an outdoor showroom that displays RV’s in a campground setting as they were intended. In 2019, The Great Outdoors RV Superstore expanded their footprint, opening a location in Clay. The facility features an indoor showroom that can display up to 75 vehicles year-round in a climate-controlled environment. In honor of Jerry, who was an avid Disney fan, the RV Dealers Association of Syracuse planted a tree at the Fulton dealership with a quote by Walt Disney that reads, “All our dreams can come true, if we have the courage to pursue them.”

“Finding Jesse Stopnitzky and Performance Brokerage Service was the key to selling my RV dealership,” said Bill Clark, President of The Great Outdoors RV Superstore. “Jesse was vested in a positive outcome from the start and never took his eye off the ball! His expertise brought me a deal within weeks and closed 90 days later. The time he took to get to know my family and me was an added bonus. Jesse’s integrity, perseverance and sense of humor sets him aside from the rest. I highly recommend Jesse Stopnitzky and the Performance team to anyone considering selling or buying in the RV market.”

Over the last 5 years, Performance Brokerage Services has advised on the sale of over 250 dealerships, making it the highest volume dealership brokerage firm in North America. In 2021, the company expects to consummate over 70 transactions, marking a record-breaking year. Jesse Stopnitzky, Partner at Performance Brokerage Services and the Director of the RV Division, commented, “After 33 years of ownership, the sale of a dealership is naturally emotional. This responsibility put upon us is one that we do not take lightly. I feel privileged that the Clark family entrusted us in executing their business and personal goals. The opportunity to work with such gentlemen in both Bill Clark and Brian Wilkins was extraordinary. I wish Bill an enjoyable retirement and Brian much success with the acquisition.”

Charles Wilkins founded an auto detailing shop in Hornell, New York in 1936. He began selling RV’s in the 1950’s alongside his son, Ronald Wilkins, who took over the business in the early 1960’s and changed the name to Wilkins RV.

In 2004, Ronald sold the business to his son, Brian Wilkins, who is credited for the growth and expansion of Wilkins RV. Outgrowing the facility in Hornell, Wilkins RV built a 50,000 square foot facility on 25 acres and moved the dealership to its current location in Bath.

In 2011, Wilkins RV opened a second location in Churchville and in 2017, expanded to their third and fourth locations with their acquisitions of Ballantyne RV in Victor and Caps and Campers in Cicero.

“We are proud and excited to take over and build upon the proud heritage that has been built by The Great Outdoors RV Superstore and its employees,” said Brian Wilkins, President of Wilkins RV. “They have a great customer following and we look forward to supporting that customer base and continuing the growth they have experienced for over 30 years.”

Bill Clark concluded, “It truly has been an honor to have been a part of the Central New York recreation market for over three decades. Our employees have always been the driving force behind our success and of utmost importance was to seek a suitor with the same culture, reputation, and customer service. Wilkins has dominated the Western RV market for well over 70 years and I could not be more pleased to pass the baton on to Brian and his team as they take what we started to the next level.”