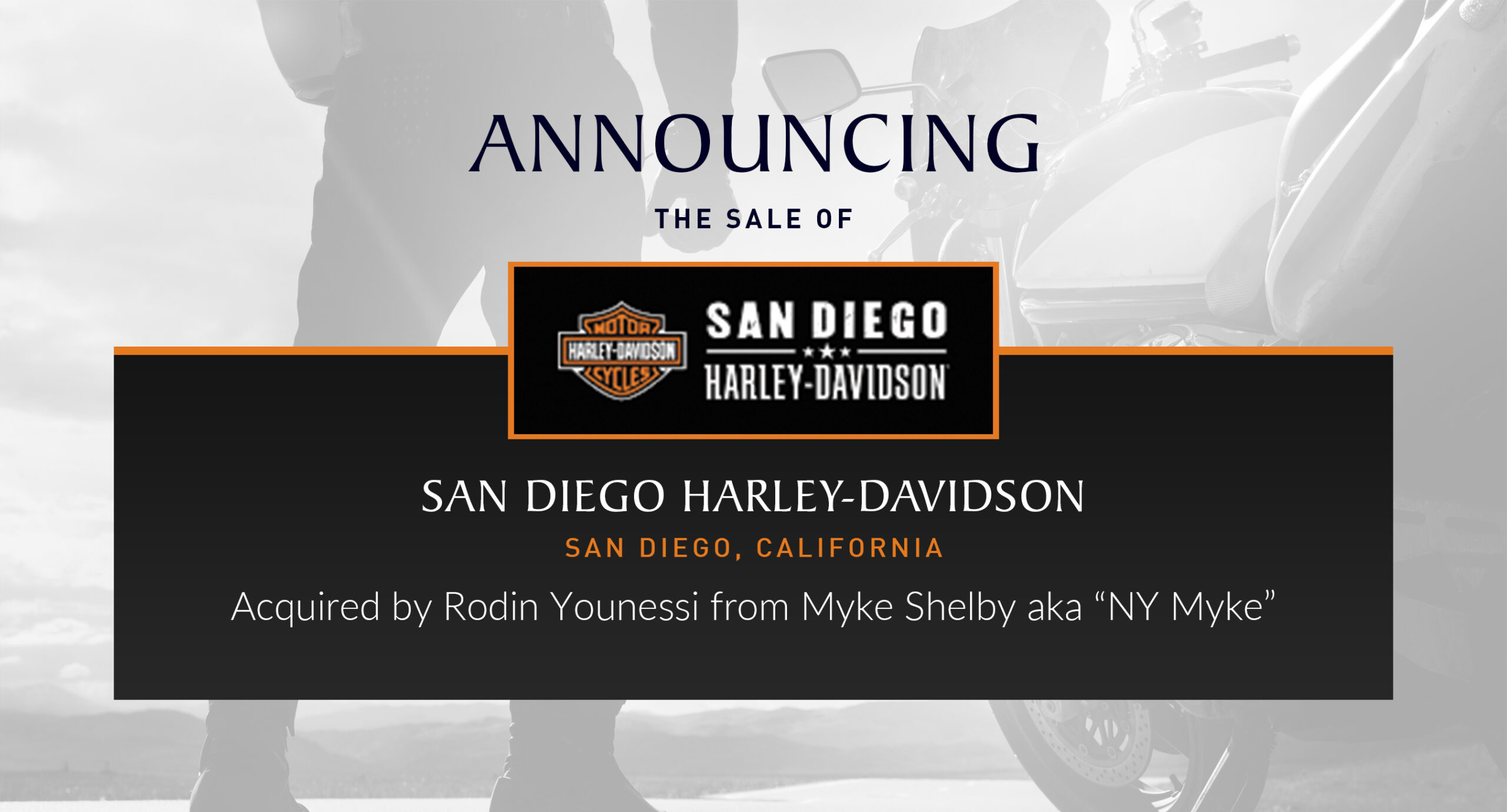 Performance Brokerage Services is pleased to announce the sale of San Diego Harley-Davidson in San Diego, California from Myke Shelby aka “NY Myke” to Rodin Younessi.

San Diego Harley-Davidson in California was purchased by Myke Shelby over 27 years ago. Shelby, also known as “NY Myke”, is an avid Harley-Davidson rider and enthusiast with a passion for the brand like no other. NY Myke served with the 101st Airborne as a forward air controller during the Vietnam War and has since brought his passion of the Harley-Davidson motorcycle brand together with his remarkable support of veteran’s affairs. NY Myke was inducted into the Motorcycle Freedom Fighters Hall of Fame and for over 25 years, has been involved with Rolling Thunder. This motorcycle rally occurs every Memorial Day in Washington D.C. with over 300,000 riders and focuses on never forgetting the POW/MIA issue. NY Myke also announced his candidacy on May 31, 2005, when he ran for Mayor of San Diego. Upon the sale, NY Myke commented, “If you own a Harley-Davidson dealership, you probably know George Chaconas. I’ve known George for a long time and nobody networks better! Knowing George is always a good thing if you want to hang out, get lunch or dinner, or if you have time for a good cigar. But knowing George is a great thing when you want to sell your business! When it became clear that the succession plan in place wasn’t going to happen, I decided to sell SDHD after 27 years, and George quickly went from friend to ally. George knows this industry and our brand inside & out. He knows everyone! The sellers and the buyers, and he knows how to make the chemistry work. We ‘kissed lots of frogs’, but the minute he introduced me to Rodin Younessi, George knew the deal was as good as done! My thanks to everyone involved: George, Rodin, everyone at Harley-Davidson for 27 great years, to the great staff at SDHD, and to my amazing wife Petrina! I’m looking forward to spending lots of time on my Harley and staying friendly with George Chaconas because you never know what opportunities can turn up and George is always on a roll!”

Rodin Younessi has a well-established history in the Harley-Davidson business. Rodin, a professional race car driver and well established career-driven businessman from Palm Beach, Florida, owns and operates multiple high-volume Harley-Davidson dealerships throughout the U.S. San Diego Harley-Davidson adds his 8th location to his impressive lineup of accomplishments in the powersports industry. While his career began in the software industry, Rodin received his Juris Doctorate and was admitted as a member of the Florida and Federal Bar. Younessi is also a well-accomplished competitive racer, participating in the U.S. F2000 National Championship and the 24 Hours of Le Mans. He was also the first American to pilot the McLaren 12C GT3 during the Blancpain Endurance Series. His success has also brought widespread support by Rodin and his commitment to hosting charity events at his dealerships along with donations of vehicles for auctions and motorcycles to local law enforcement agencies. In 2006, Younessi was knighted and received the title of Chevalier by the Order of St. John of Jerusalem, Knights Hospitaller. Rodin also owned a Lamborghini dealership in Palm Beach, Florida. Younessi stated, “Looking to expand my platform in Southern California, Harley-Davidson expert-broker and friend, George Chaconas, introduced me to San Diego Harley-Davidson. I am very excited to continue the legacy that ‘NY Myke’ has built for over 27 years! George and I have worked together for over 17 years on many acquisitions and I look forward to many more as we continue to grow together. If you are in the market to buy or sell a Harley-Davidson dealership, I would call George Chaconas and Performance Brokerage Services!”