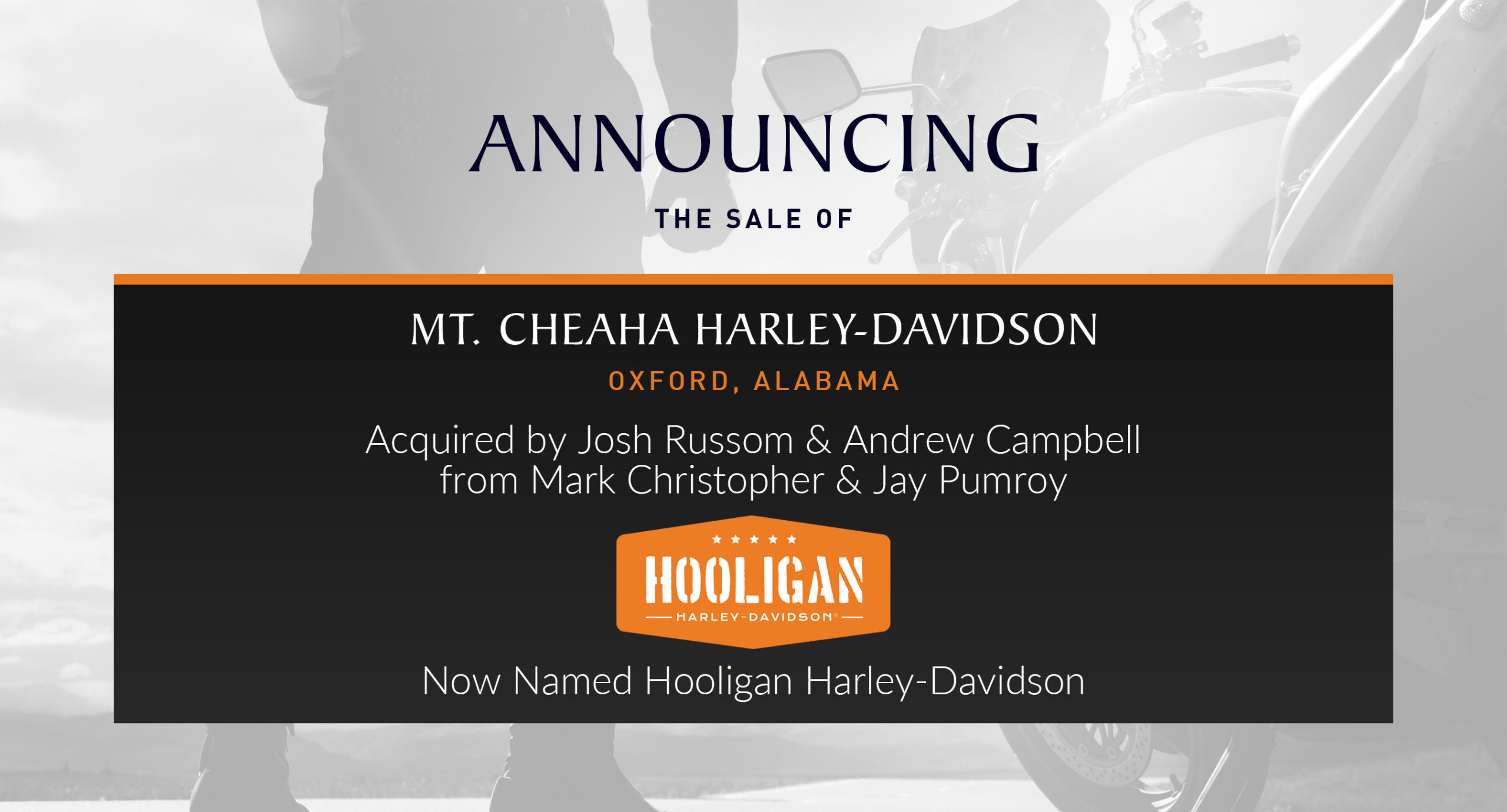 We are pleased to announce the sale of Mt. Cheaha Harley-Davidson in Oxford, Alabama from Mark Christopher and Jay Pumroy to Josh Russom and Andrew Campbell.

Mt. Cheaha Harley-Davidson in Oxford, Alabama was acquired in 2003 by Jay Pumroy who later partnered with Mark Christopher in 2013. The dealership has been a staple in the community, hosting many events and supporting a loyal Harley-Davidson rider group. Since partnering with the Jay, Toni Christopher, Mark’s wife was instrumental in the marketing details of the dealership and in 2015, began hosting the annual “Rumble on the Loop” featuring live bands at the dealership’s on-site amphitheater. The employees have also been known for providing riders exceptional sales and service throughout the years, just one of many reasons to visit the dealership. Owner Mark Christopher commented, “After much thought and consideration, my partner Jay and I decided to hire George Chaconas of Performance Brokerage Services to advise us on the sale of Mt. Cheaha Harley-Davidson in East Alabama. George aggressively marketed our store and ultimately, we negotiated a deal with our neighboring dealers, Josh Russom and Andrew Campbell. George’s 20 years of experience in advising and brokering Harley-Davidson dealerships was very instrumental and helpful in the negotiations and throughout the buy sell process! He was always available and very responsive. I genuinely enjoyed working with George. When you are considering selling your Harley-Davidson dealership, I would definitely suggest you contact George Chaconas!” Mark and Toni Christopher will continue to own and operate their powersports dealership, Motorcycle Sports located in Munford, Alabama. http://www.motorcyclesportspolaris.com

Josh Russom and Andrew Campbell are the new owners of what will now be known as Hooligan Harley-Davidson. Josh and Andrew currently own Redstone Harley-Davidson in Madison, Alabama and Blue Ridge Harley-Davidson in Hickory, North Carolina. The buyers had been looking to expand their already booming Harley-Davidson enterprise and reached out to George Chaconas who previously provided excellent customer service during the purchase of their two current locations. George C. Chaconas, the exclusive agent for this transaction and the head of the National Harley-Davidson and Powersports Division for Performance Brokerage Services, knew this opportunity would be a perfect strategic acquisition for them. George commented, “I am extremely excited to have helped Josh and Andrew acquire their third dealership. This is an excellent opportunity for them to expand their footprint into the East Alabama market and I look forward to helping their continued growth and success.”

The dealership will proudly display their new name and logo, Hooligan Harley-Davidson at its current location at 231 Davis Loop Road in Oxford, Alabama 36203.