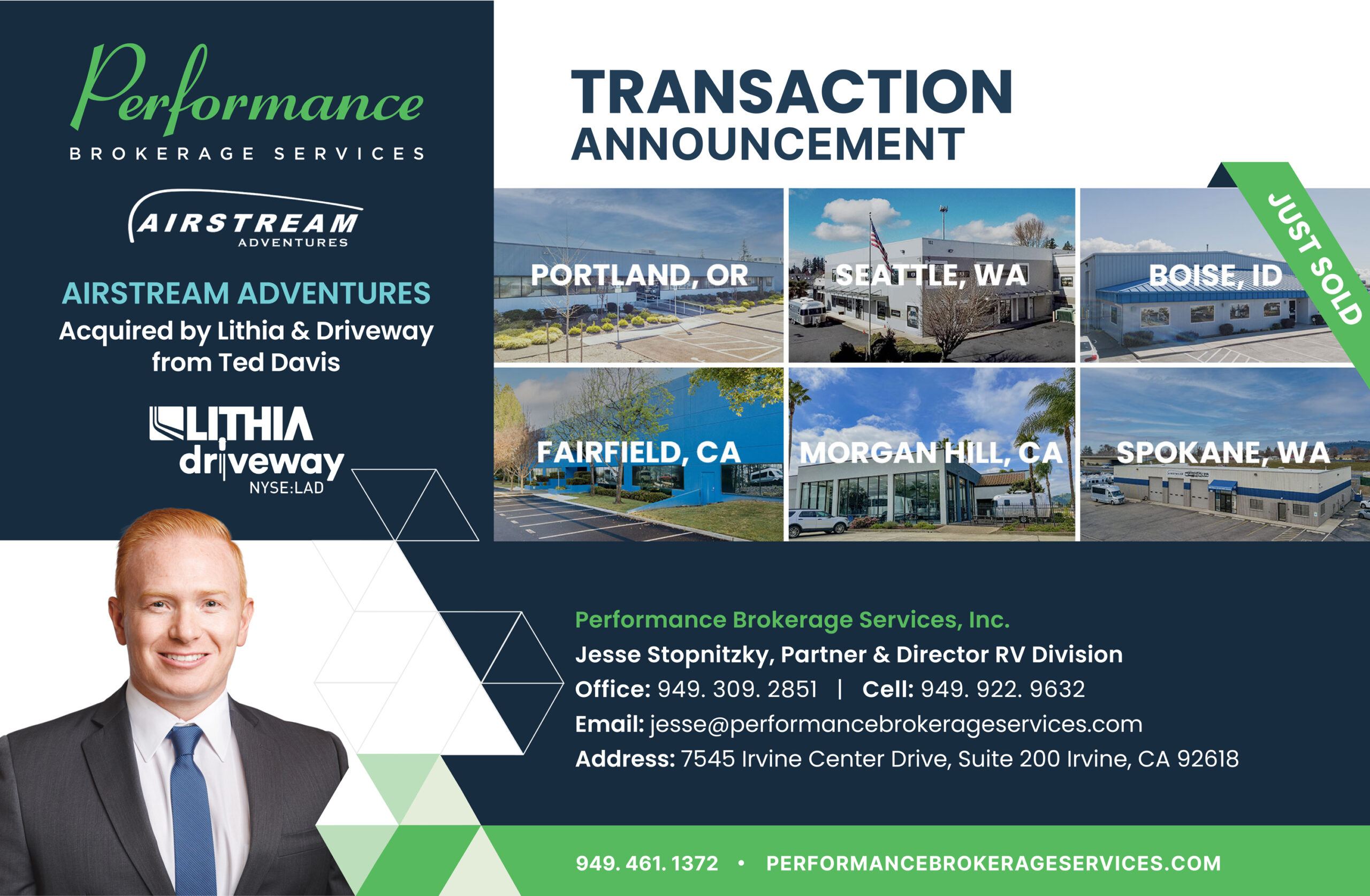 Performance Brokerage Services, the leader in dealership buy-sell activity, announces the sale of Airstream Adventures with six Airstream dealerships in Oregon, Washington, Idaho, and California to Lithia and Driveway (LAD).

Following the sale, Ted Davis commented, “Jesse Stopnitzky and his team provided exceptional strategic advice and a laser targeted list of potential buyers from a variety of industries, not just limiting us to the RV industry. This approach allowed us to maximize our value and find the perfect partner to acquire our entire dealer group that was both an operational and cultural fit. Jesse’s approach was transparent, strategic, and met all the objectives of the owners, our Team Members, our Guests, Airstream, and Lithia. Commitments were made and commitments were kept. Integrity, high work ethic, transparent, driven, and honest are characteristics I would use in describing Jesse and his team.”

Over the last 5 years, Performance Brokerage Services has advised on the sale of over 300 dealerships, making it the highest volume dealership brokerage firm in North America. In 2022, the firm is pacing well-over 100 dealership transactions, marking a record-breaking year. Jesse Stopnitzky, Partner and Director of the RV Division for Performance Brokerage Services, commented, “It was a true honor to represent Ted Davis, an exemplary individual, in this life changing event. In 2021, Ted was awarded by his RV peers the Arthur J. Decio Humanitarian Award for his unwavering dedication to philanthropy and his communities. It has been a pleasure to witness Lithia’s unprecedented growth and their commitment to operate under a higher code of conduct. With shared core values, the merging of these two Oregon-founded companies was the perfect strategic fit! Working with Lithia for over 25 years, our firm is proud to have provided Lithia the opportunity to expand into this new vertical.”

The Airstream Adventures acquisition will add the first Recreational Vehicle franchise to the group’s lineup, bringing their dealership count closer to 300 locations.

Following the sale Bryan DeBoer commented, “We are delighted to welcome the Airstream Adventures stores and its founder, Ted Davis, to our growing Lithia and Driveway family. Ted and his high performing team have done an exceptional job building the nation’s largest exclusive [Airstream] dealer group. We are committed to becoming a steward of the iconic Airstream brand, ensuring that consumers will continue to create memories and adventures that last for generations.”

The dealerships will continue to operate at their current locations: