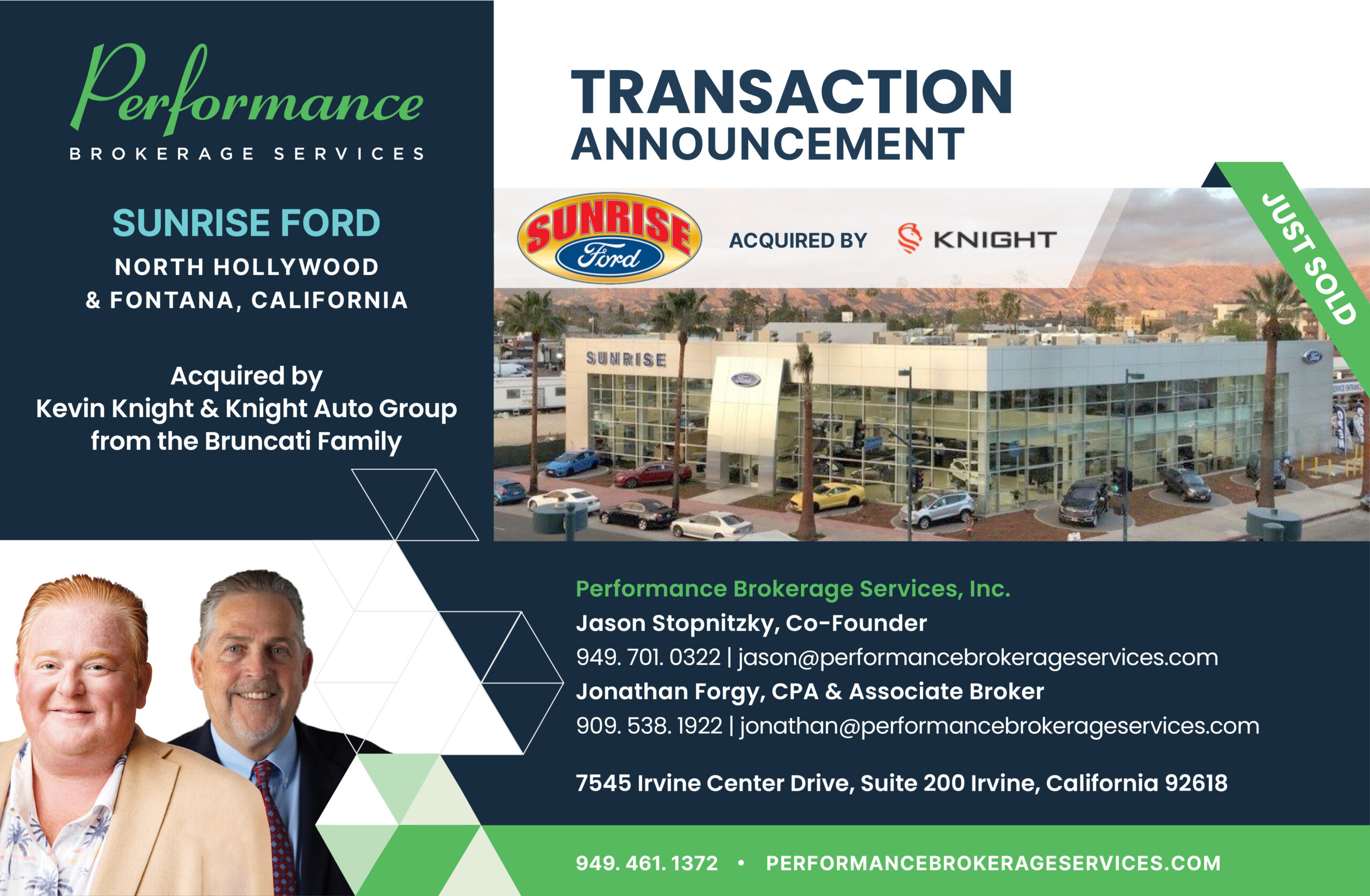 Performance Brokerage Services, North America’s highest volume dealership brokerage firm, is pleased to announce the sale of Sunrise Ford of Fontana and Sunrise Ford of North Hollywood in California from the Bruncati family to Kevin Knight and Knight Automotive Group.

Sunrise Ford has been owned and operated by the Bruncati family for more than 30 years. Robert Bruncati began his career in 1981 as a Ford dealer in Los Angeles. In 1991, Robert and his wife, Maureen Bruncati, established Sunrise Ford of Fontana. They acquired Sunrise Ford of North Hollywood in 1996, which has a long-standing presence in the community and has been at its current location since 1966. In 2014, Sunrise Ford of Fontana won Ford Motor Company’s prestigious Triple Crown award. Over the years, Robert and Maureen Bruncati’s three sons took over the family business and managed the day-to-day operations.

Following the sale, owner James Bruncati commented, “The team at Performance Brokerage did a phenomenal job. Jonathan Forgy did a great job of building a comprehensive packet, and Jason Stopnitzky did a great job at finding the right buyer. They found a buyer that fit very well with the culture we built. Kevin Knight and Braeden Mueller from Knight Automotive were a pleasure to deal with and I feel they will do extremely well in the future. Thank you to the whole team at Performance Brokerage Services.”

Over the last 5 years, Performance Brokerage Services has advised on the sale of over 250 dealerships, making it the highest volume dealership brokerage firm in North America. In 2021, the company consummated over 72 transactions, marking a record-breaking year. Jonathan Forgy, CPA, an Associate Broker for Performance Brokerage Services, commented, “I want to thank the Bruncati family for the vote of confidence in our firm to handle the sale of their generational family business as a Ford dealer for over forty years. The family was looking for an advisor that could help them maximize the value of their dealership without compromising confidentiality. It was important for the Bruncati family to find the right buyer who would take care of their employees and invest in the company and community. The buyer will benefit from the dealerships’ tremendous goodwill with customers, employees, and the community. It has been an honor to work with the Bruncati family throughout the process and we wish them well in their future endeavors.”

Braeden Mueller of Knight Automotive Group commented, “The entire Performance Brokerage team was excellent to work with. We continued to be in touch over the years and they worked with our group to find the right fit on our first acquisition in the United States. Knight Automotive Group looks forward to working with Performance Brokerage on future acquisitions.”

The dealerships will remain at their current locations at 16005 Valley Boulevard in Fontana and 5500 Lankershim Boulevard in North Hollywood, California.