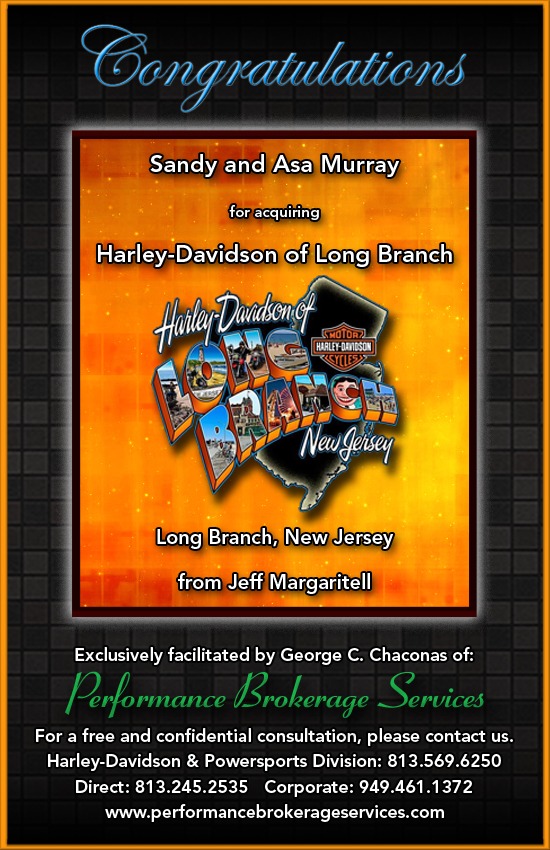 After forty-three years of ownership, Jeff Margaritell sells Long Branch Harley-Davidson to Asa Murray, owner of Ocean County Harley-Davidson in Lakewood, New Jersey. Jeff founded Harley-Davidson of Long Branch in 1972 along with three partners. Since, he grew the operation into a 20,000 square foot facility and employs over 25 employees. The dealership was ranked a top-100 dealer by Dealernews Magazine, has received Gold, Silver and Bronze Bar & Shield Awards from Harley-Davidson Motor Company, and is considered the #1 service department in the district, according to Harley-Davidson customer service surveys. Read the Official Press Release

I frequently received inquiries and notices regarding recent transactions of Harley-Davidson dealerships from George Chaconas and Performance Brokerage Services. I finally made the very difficult and emotional decision to call George Chaconas to guide me in the sale of my dealership. George and his team put together an opinion of value which I felt was fair and was very comfortable with. I felt even more confident due to their vast buy/sell experience and ability to maximize the value of my dealership through their marketing and sales process. Ironically, George was able to negotiate a win/win purchase price with my biggest competitor. George convinced me that he was the most qualified and best buyer to carry on my legacy at Harley-Davidson of Long Branch. After being in business for over 43 years some of my customers include Bruce Springsteen and Jon Bon Jovi among others. George was very responsive throughout the entire transaction, from the Letter of Intent to the Buy/Sell to the Closing, always returned my calls quickly and promptly, day or night and even on weekends. Without George’s expertise, integrity and honesty throughout the process, I do not know what would have happened or how this transaction would have panned out. He was very professional and diligent in educating me and I want to thank George very much for his ability to keep me centered and focused during this very emotional transition in my life. I would highly recommend George and Performance Brokerage Services if you are considering selling or buying a Harley-Davidson dealership.

George Chaconas of Performance Brokerage Services contacted me in reference to a Harley-Davidson dealership he had engaged to market and sell. After I signed the Confidentiality Agreement, George shared the opportunity and information on Harley-Davidson of Long Branch, New Jersey. I have had a strong interest and desire to own that dealership and expand my territory for years.  I was very excited about working with George and making a deal happen. This dealership was the perfect strategic fit.  George was very informative, professional, and shared all pertinent information very quickly. He was extremely helpful in successfully maintaining confidentiality while negotiating through the Letter of Intent, especially since the seller, Jeff Margaritell was very concerned about word getting out that he was selling his dealership. I knew that Jeff was most likely nervous and uncomfortable about me having discussions about and buying his store as we were direct competitors for many years. Once Jeff and I became comfortable with each other, with George’s assistance, we were able to work through a buy/sell in order to consummate a deal that all parties felt was fair and equitable. I look forward to continuing the legacy that Jeff began 43 years ago at Harley-Davidson of Long Branch. I greatly appreciate George’s assistance in navigating through this transaction and would definitely recommend him and Performance Brokerage Services if you are buying or selling a dealership.