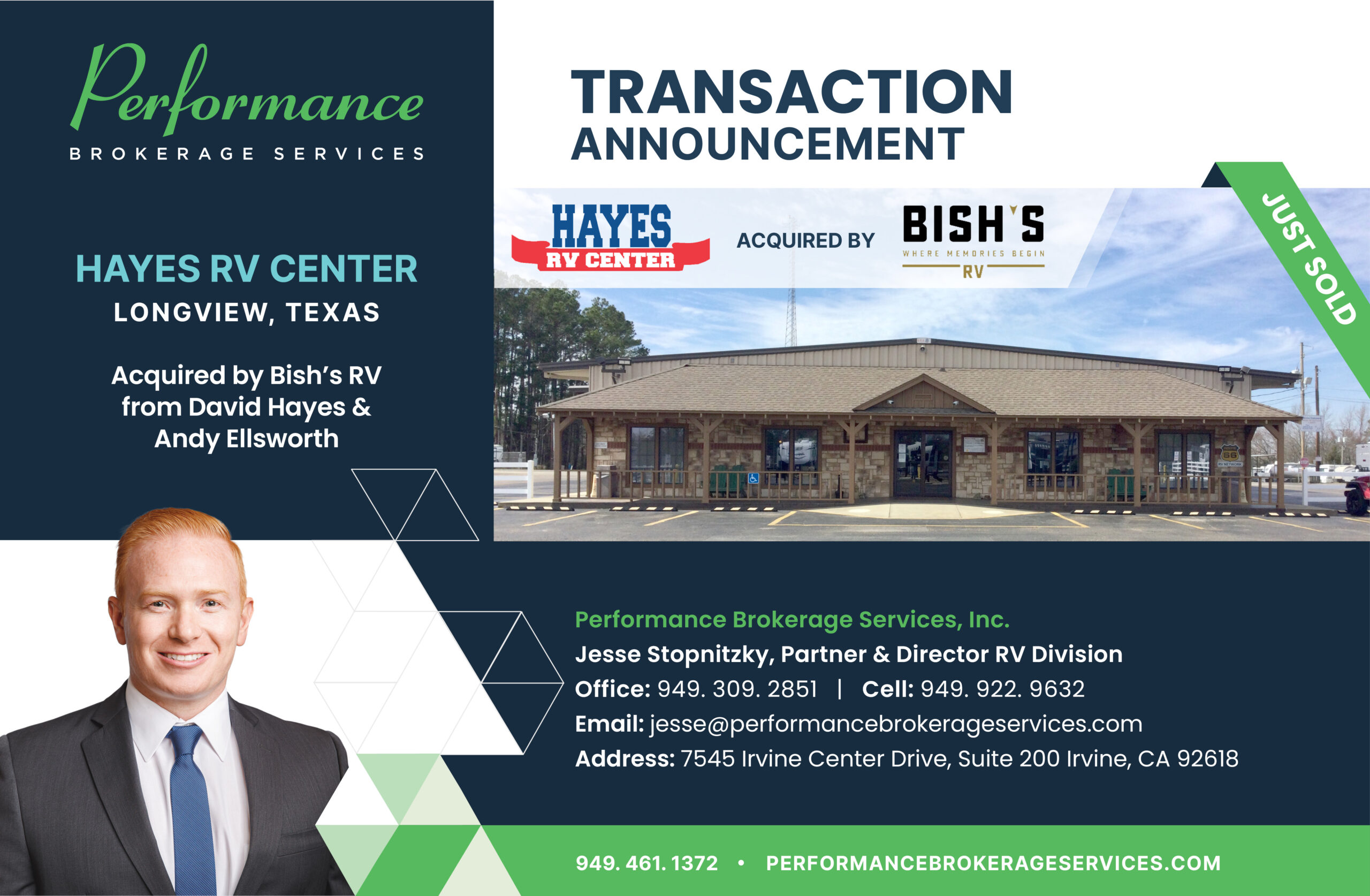 Hayes RV Center was established by the Hayes family in 1947. David Hayes acquired the dealership from his parents in 1979, and moved the dealership to its current location. David’s brother-in-law, Andy Ellsworth, was a partner and remains the General Manager of the dealership.

Following the sale, David and Andy commented, “Jesse Stopnitzky and Performance Brokerage assisted us with the sale of our 75-year-old family business. We painted a picture for Jesse of everything that was important to us to attain not just a sale, but a proper fit that suited us as sellers, and for our employees and our community. We relayed to Jesse the importance to align with a company that could most closely match the heritage of our values, ethics, and community involvement. Jesse attentively facilitated all our questions and needs. Jesse did not just become a business partner, but he took this to heart and worked diligently to vet out potential suiters and find a company that most closely met our criteria. Jesse genuinely showed complete respect, determination, and care throughout the entire process. When Jesse did bring a player to the table, it was a company that was indeed a great match. In working with Jesse, it quickly became apparent that not only were we partnering with a genuine person, but a company that shares many of the same values and ethics that we do. If you want more than just a broker, but someone who is a true partner, then you have found just that in Jesse and Performance Brokerage. We highly recommend them both.”

Over the last 5 years, Performance Brokerage Services has advised on the sale of over 300 dealerships, making it the highest volume dealership brokerage firm in North America. Jesse Stopnitzky, the exclusive agent for this transaction and the Director of the RV Division for Performance Brokerage Services commented, “It was a true honor representing David Hayes in the sale of his family’s 75-year-old business. David is an exemplary individual, demonstrating the highest level of integrity. Well-respected by his peers, his family of team members, and his community, I am proud to call David a friend. Thank you to the Hayes family for the privilege of being entrusted to handle this pivotal and lifechanging event. Together, we successfully reached an ideal outcome and I could not be more happy for the Hayes family.”

The dealership will remain at its current location at 5009 Junction Road in Longview, Texas.