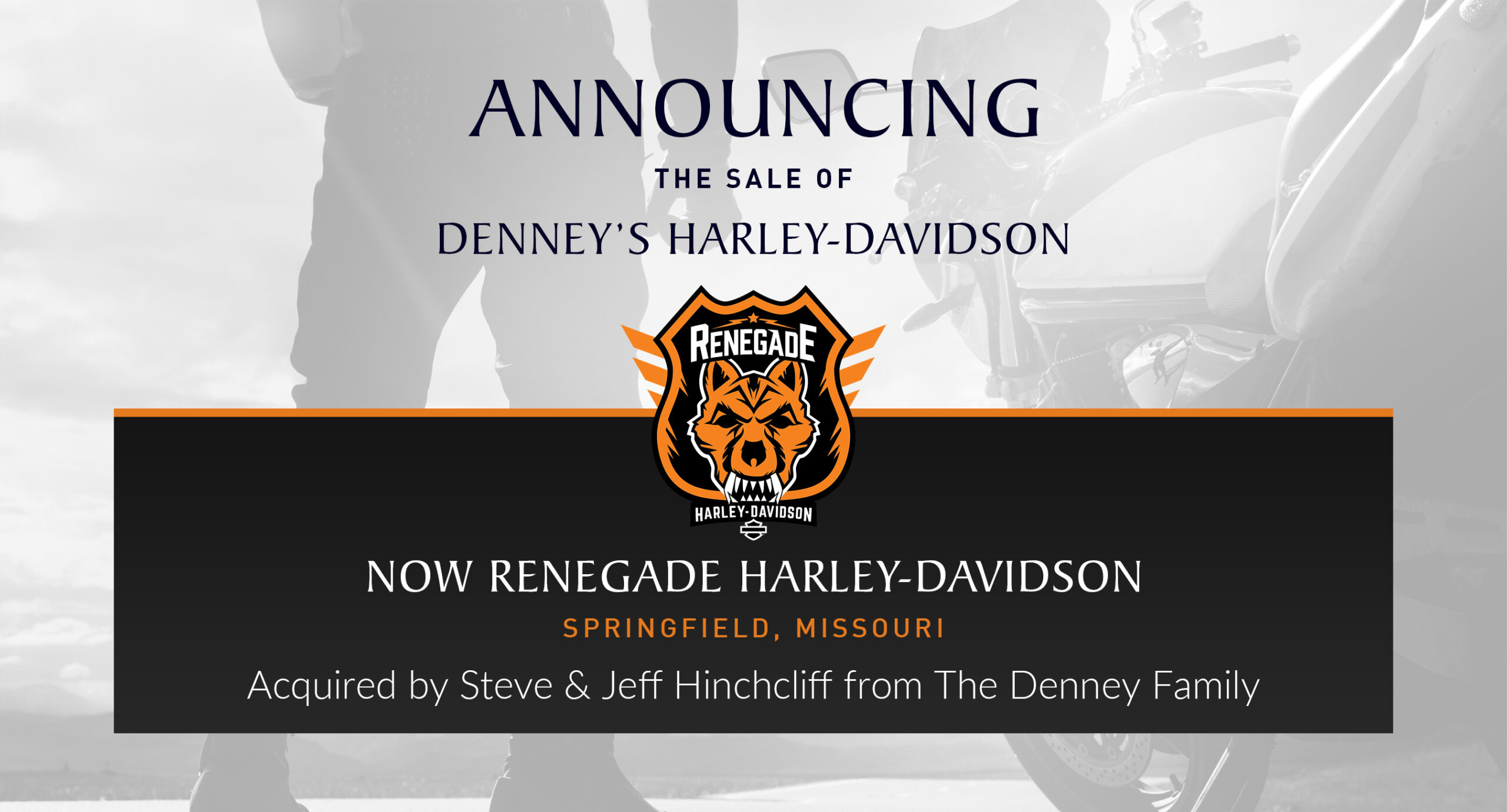 We are pleased to announce the sale of Denney’s Harley-Davidson in Springfield, Missouri from The Denney Family to Steve & Jeff Hinchcliff of H & H Automotive.

The Denney Family has a long history with Harley-Davidson. Their legacy began in Fort Smith, Arkansas in when they opened their first dealership in 1976. In 1989, they opened their second location in Springfield, Missouri and later sold the Arkansas location. The dealership is located on the outskirts of Springfield allowing riders to escape to the backroads and enjoy the Ozark Mountains where lakes, rivers, valleys, and national forests abound. It is safe to say that The Denney Family has had a long road and weathered the highs and lows during their long tenure. Through it all, the customer service and community involvement has been instrumental. Denney’s Harley-Davidson celebrated their 17th H.O.G.S. for Dogs charity amid the pandemic of 2020, one of their biggest events they host. The only thing bigger than the motorcycles are the smiles the riders have when they purchase a bike. Customer service and the family atmosphere have paved the way for the new owners. Mark Denney commented, “George Chaconas and Juan Pardo of Performance Brokerage Services reached out to me several years ago about selling as they had several buyers that wanted to buy our family’s Harley-Davidson business. They stayed in touch, and as we got older, and with the pandemic and the changes at the Motor Company, we finally decided to sell and retire. The ultimate buyer they brought to us was great! We want to thank George and Juan, and highly recommend them when you are ready to sellout and retire!”

Over the last 5 years, Performance Brokerage Services has represented for sale over 250 automotive and motorcycle dealerships making it the highest volume automotive and motorcycle dealership brokerage firm in North America. George C. Chaconas, the exclusive advisor for the buyer in this transaction and the head of the National Harley-Davidson and Powersports Division for Performance Brokerage Services commented, “I want to thank Mark Denney, his brothers and Amanda Stehle for the opportunity to help the family sellout and retire. Amanda and her husband, Brian, have been instrumental employees and will be staying on with the new ownership. After selling Frontier Harley-Davidson in Lincoln, Nebraska to Steve and Jeff Hinchcliff, it was an honor and privilege to advise them on the purchase of their second Harley-Davidson dealership, Denney’s Harley-Davidson in Springfield, Missouri. Good luck to you and your team!”

Steve and Jeff Hinchcliff own several automotive dealerships in Omaha, Nebraska, though they are no strangers to the Harley-Davidson brand. They have owned Frontier Harley-Davidson in Lincoln, Nebraska since March of 2018. Prior to their purchase, it went through a relocation, four expansions, major remodeling and two additions. Steve and Jeff know how to keep the wheels greased while providing superior customer service backed by a team of professional sales members, finance experts, service technicians, and a knowledgeable parts and accessories staff to support their customers. It was a natural fit for both sides who pride themselves on the same vision and strive for customer satisfaction. Jeff Hinchcliff commented, “Since Steve and I acquired Frontier Harley-Davidson in Lincoln, Nebraska from George Chaconas of Performance Brokerage Services, we had always envisioned buying another dealership. We reached out to George and hired him to help us identify dealerships for sale. After looking at several stores, we decided to target Denney’s Harley-Davidson as it was a great opportunity! George and Juan were instrumental in guiding us in the negotiations and eventual purchase. With their industry experience, expertise and professionalism, the transaction went smoothly. If you are in the market to acquire a Harley-Davidson dealership, I would highly recommend George and Performance Brokerage Services!”

The dealership will be renamed and operate as Renegade Harley-Davidson, remaining at its current location of 3980 West Sunshine Street in Springfield, Missouri. Steve and Jeff Hinchcliff have plans to eventually relocate the dealership and build a brand-new state of the art facility.

The seller was represented by Robert Bass of Bass Sox Mercer.

The buyer was represented by Paul R. Elofson of Fitzgerald Schorr, P.C.