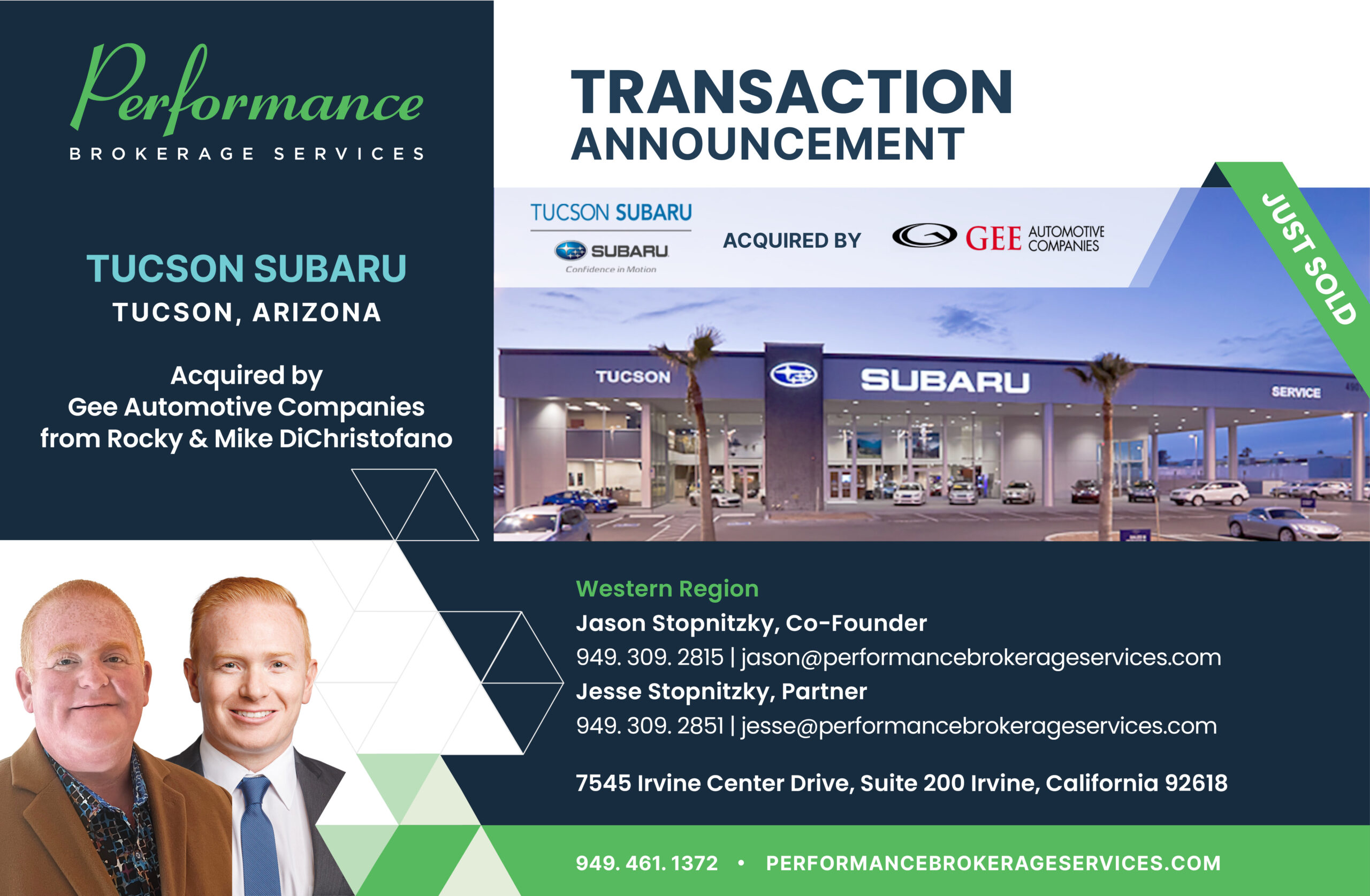 Brothers, Rocky and Mike DiChristofano, have been in the automotive industry for more than 30 years. Following in their father’s footsteps, they took over the family business in 1995 after their father Frank’s retirement. In 2009, they acquired Tucson Subaru, and in 2014 they relocated the dealership to a new state-of-the-art facility with a 31,000-square-foot showroom on more than 8 acres.

Tucson Subaru has been the recipient of the “Dealer of the Year” award from DealerRater for 8 years running.

Following the sale, Rocky DiChristofano, President of Tucson Subaru, commented “I want to thank Jason Stopnitzky of Performance Brokerage Services for his friendship, and for his help with our recent buy-sell. My brother and I really enjoyed working with Jason and the Performance team when we sold our Volvo store a few years ago, and we wouldn’t have considered working with any other broker when it came to selling our Subaru store. We appreciated Jason’s professionalism, ease of doing business, and extensive resources during the sale process. Jason was able to find us the right buyer, at the right terms, and a fair price. We couldn’t be happier with Jason or the transaction. Thank you to Jason for being such a great business partner and friend through the years. I would certainly recommend Jason and Performance Brokerage Services to any dealer looking to sell their store. “

Over the last 5 years, Performance Brokerage Services has advised on the sale of over 250 dealerships, making it the highest volume dealership brokerage firm in North America. In 2021, the company consummated 72 transactions, marking a record-breaking year. Jason Stopnitzky, the exclusive agent for this transaction and the Co-Founder of Performance Brokerage Services commented, “Rocky and Mike DiChristofano are true leaders in their community and exemplify the best of the best. We were incredibly grateful for the opportunity to be of service and handle their legacy transition with the utmost respect and honor. We couldn’t have found a better fit to take this dealership to the next level than Ryan Gee and Jeff Jackson of Gee Automotive Companies. This is our seventh transaction together, and what they have accomplished starting with a General Motors dealership in Spokane, to where they are today, is truly incredible and inspirational to all their colleagues and fellow dealers observing from the outside. I am excited for the future and to watch the Gee Automotive Group grow their presence.”

Gee Automotive Companies was established in 1983 when George and Theresa Gee acquired their first dealership in Spokane. The dealership eventually grew to become the largest Pontiac dealership in the state of Washington. In 2003, their son, Ryan Gee, became the President and CEO. In 2010, Ryan brought on Jeff Jackson who would assume the role of President, with Ryan as CEO and Dealer Principal. With a firm belief that great people grow a great company, Ryan and Jeff have grown Gee Automotive Companies to include 26 brands and 27 dealership locations across Washington, Idaho, Oregon, and Arizona.

Ryan Gee, CEO of Gee Automotive Companies, commented, “Jason Stopnitzky and Performance Brokerage are exceptional at what they do. We’ve worked with them on many transactions over the years and are always impressed by their professionalism, knowledge of the market, and ability to streamline complex transactions. With the buy-sell market so active, it’s more important than ever to work with great people who you trust and can facilitate win-win transactions for buyers and sellers. We’d recommend Jason and Performance Brokerage Services to anyone looking to buy or sell a dealership.”

The dealership will remain at its current location at 4901 North Oracle Road in Tucson, Arizona.