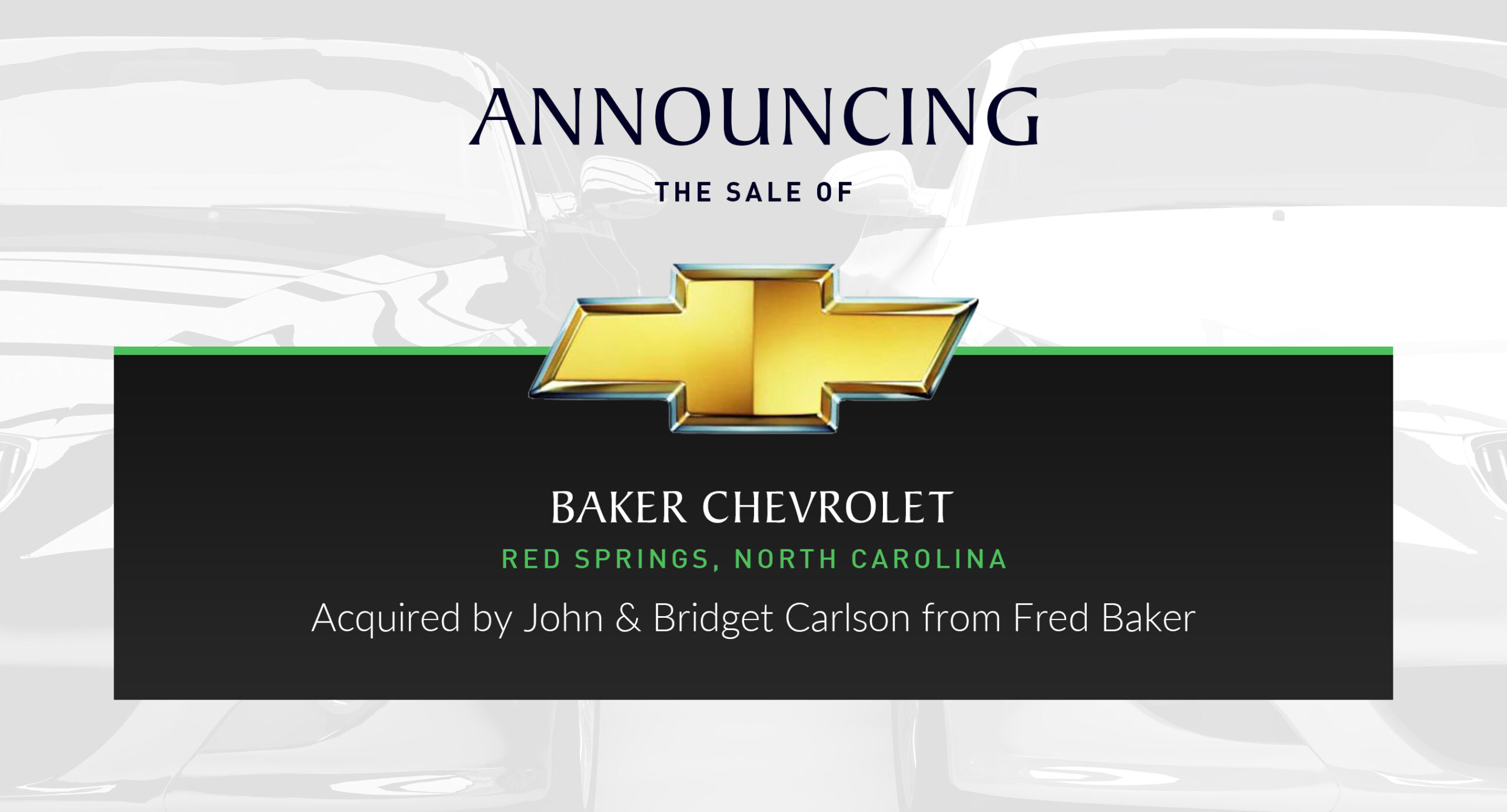 Performance Brokerage Services, a new car dealership broker, is pleased to announce the sale of Baker Chevrolet in Red Springs, North Carolina from Fred Baker to John and Bridget Carlson.

In 1987, a childhood wish came true for Fred Baker. From the young age of 13, his goal was to become a Chevrolet dealer. His father was a Volkswagen dealer in Concord, North Carolina and Fred spent 18 years there until he and his brother opened a used car store. On July 28, 1987, Fred purchased Baker Chevrolet from the original owner, Mr. Watson, who also attended the closing this past week. Anyone who has had the pleasure of doing business with Fred knows he is a straight shooter with a big heart, and treats his employees and customers like family. Courtney Bernhard of Performance Brokerage Services stated, “Working with Fred has been an absolute blessing. His patience to get through this transaction was greatly appreciated and speaks to his character. After meeting his son and lovely wife at the closing, it’s clear why they have been in business for 34 years. I was honored to be able to help Fred retire.” Although, according to Mrs. Baker, “He will never stop working.”

Fred’s son, Carson Baker, left the automotive industry and became a powersports dealer at Baker American Cycles, where you may just see Fred hanging out. Fred commented, “When it came time to sell my Chevrolet dealership, it wasn’t an easy decision. I would like to thank Courtney Bernhard from Performance Brokerage Services for putting this deal together and connecting us with a buyer within 30 days of putting the store on the market. Courtney guided both me and the buyer through the entire transaction and kept us informed every step of the way.”

Over the last 5 years, Performance Brokerage Services has represented for sale over 200 automotive dealerships making it the highest volume automotive dealership brokerage firm in North America. George C. Chaconas, the exclusive advisor for this transaction and the Southeast Partner for Performance Brokerage Services commented, “Attorney Robert Bass introduced me to Fred Baker who was considering selling his Chevrolet dealership in North Carolina. I had a previous relationship with Fred’s son, Carson, in the powersports industry, so it was a real pleasure to help the family sell their dealership after 34 years. I would like to thank our Partner, Jason Stopnitzky, in California for introducing us to the buyer, John Carlson. Courtney worked directly with the buyer the entire transaction, and did a fantastic job facilitating and managing the roadblocks along the way. I would like to congratulate Fred on his retirement and long-standing service to the community, and wish much success to the Carlson family with their new Chevrolet dealership.”

John Carlson, a former Marine, has spent over 25 years in the automotive industry, and always had a dream of owning his own dealership. When he decided to turn the dream into a reality, he reached out to Performance Brokerage Services to make it happen. John and Bridget have 5 children and 1 grandchild, and have been residing on the West Coast. They always knew they wanted to return to the East Coast, so the Baker Chevrolet opportunity was the perfect fit. John stated, “We were looking to acquire our first new franchise automotive dealership and upon the advice of a mentor, we reached out to Performance Brokerage Services. George Chaconas and Courtney Bernhard exceeded all of our expectations. They guided us through the entire process and got us through a lot of unchartered territory. We would not be the owners of our own Chevrolet dealership today without them. I would like to thank Courtney and George for their help and we look forward to acquiring more stores in the future with them.”

Courtney commented on the transaction, “Working with first-time buyers can be a challenge. However, John and his wife Bridget were phenomenal and on top of every hurdle along the way. The attorneys on both sides of the transaction were instrumental in getting this deal to the finish line, and I was very fortunate to be a part of it all. I wish everyone continued success and look forward to crossing paths again in the near future.”

The dealership will remain at its current location at 914 East Fourth Avenue in Red Springs, North Carolina and will be renamed Carlson Chevrolet.

The seller was represented by Logan Parker from Bass Sox Mercer.

The buyer was represented by Les Chayo of Chayo Law.