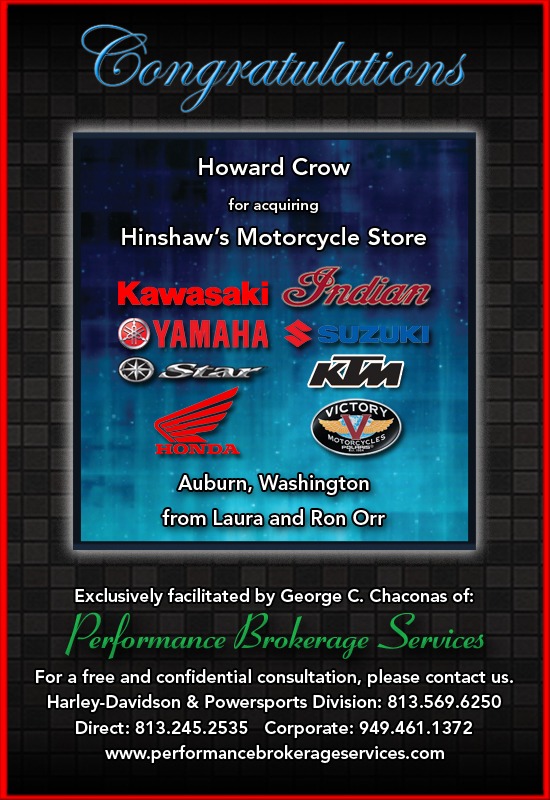 Congratulations to Howard Crow on his recent purchase of Hinshaw’s Motorcycle Store in Auburn, Washington! This transaction was exclusively facilitated by Performance Brokerage Services.

Duane Hinshaw, founder of Hinshaw’s Motorcycle Stores, has been selling scooters and motorcycles since 1961, beginning with Cushman and Honda in Enumclaw, Washington. In 1964, Duane welcomed into the business his sons Burke and Paul and opened a second location in Auburn. Soon thereafter, the Enumclaw location was closed and a new facility was opened in Puyallup. In 1989, the Puyallup location was consolidated with the Auburn location. Long-time General Manager, Ron Orr, purchased the dealership from the Hinshaw family in 1996 along with his wife Laura Orr. Ron started with Hinshaw’s in 1976 and was very familiar with the business philosophy and legacy of the Hinshaw family. In 2003, the dealership relocated to its current location at 1611 West Valley Highway South in Auburn, Washington 98001 where it boasts a 40,000 square foot facility and an additional building built in 2014 for the Indian and Victory franchises.
Read the complete press release here.