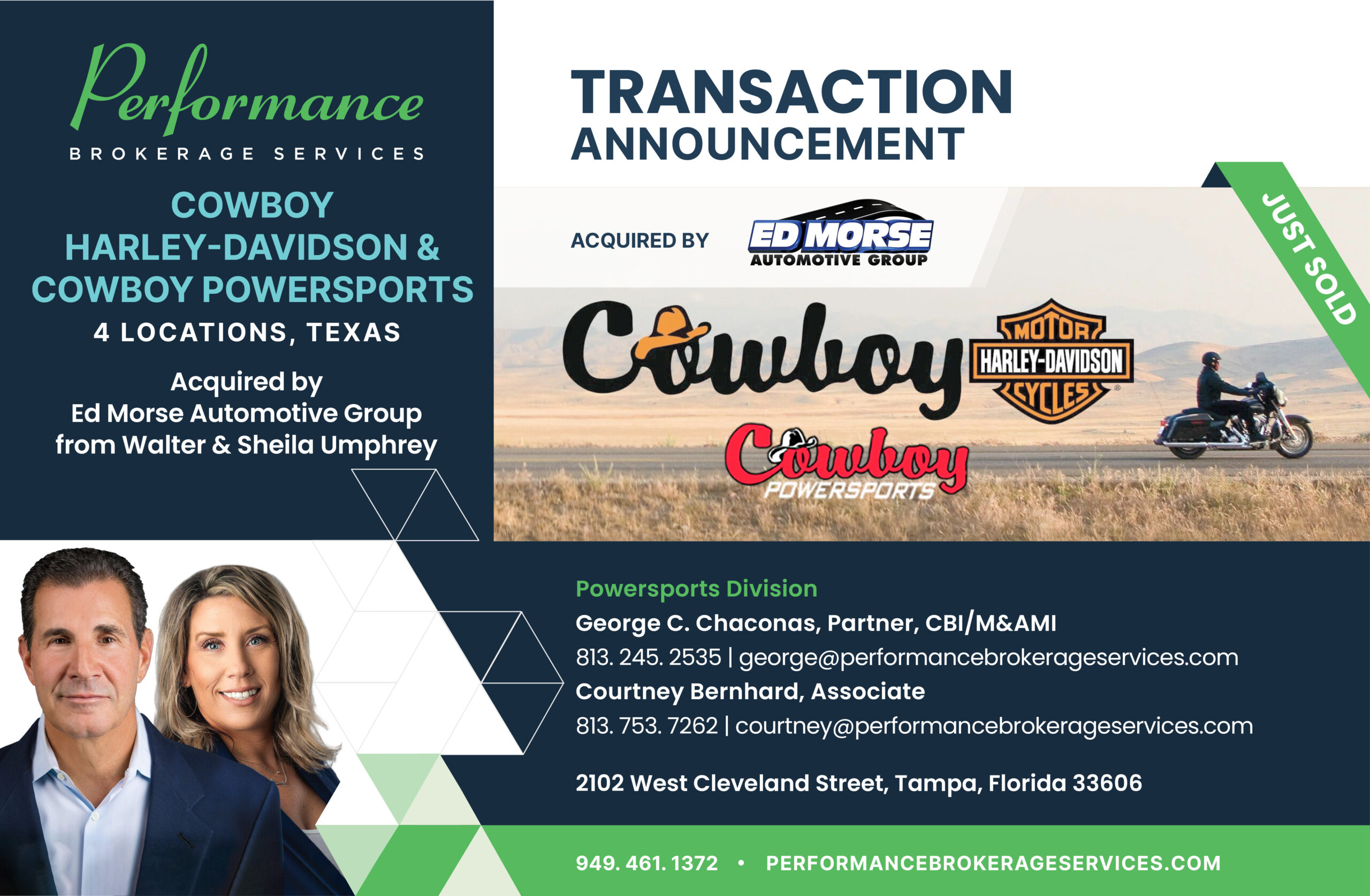 The Cowboy Harley-Davidson and Cowboy Powersports dealerships were acquired by the late Walter Umphrey in 1999. Walter, well known in the Southeast Texas community for his charitable contributions and his reputation as a successful attorney, along with his passion for motorcycles, was a natural fit as dealership owner of the legendary Harley-Davidson brand. Walter recognized that being customer focused and elevating the overall dealership experience would set them apart. The dealership organized charitable rides and hosted local artists to create an environment that the community wanted to be a part of.

Over the years, the dealerships stayed true to the core values upon which they were established and built a community of riders that knew they would always be treated fairly when visiting the Cowboy dealerships. After Walter’s passing in 2021, and after 23 years of growing the business, Sheila Umphrey, Walter’s wife, decided it was the right time to sell the dealerships.

Following the sale, Sheila commented, “I would like to thank George Chaconas and Courtney Bernhard of Performance Brokerage Services for introducing me to Teddy Morse and Randy Hoffman of the Ed Morse Group, to purchase our 3 Harley-Davidson dealerships and our Powersports dealership. Teddy and Randy were delightful and very professional to work with. We spoke with 6 other potential buyers, but Teddy’s group was the best fit because they are also a family-owned business. The group will work perfectly with our employees and that was our main goal. Thanks again.”

Over the last 5 years, Performance Brokerage Services has advised on the sale of over 300 dealerships, making it the highest volume dealership brokerage firm in North America. In 2021, the company consummated 72 transactions, marking a record-breaking year. George C. Chaconas, the exclusive buyer’s advisor for this transaction and the head of the National Harley-Davidson and Powersports Division for Performance Brokerage Services commented, “I have known of the Umphrey’s for years, and reached out to Sheila after the passing of her husband, Walter, to offer my condolences. Sheila said she would consider selling the dealerships, so I introduced her to our client, Ed Morse Automotive Group. Teddy Morse, Chairman and CEO of the group, and avid Harley rider, jumped on the opportunity to own a Harley-Davidson dealership. Given the large scope and complexity of this transaction we were able to work through the many challenges that arose through the buy-sell process. Both parties were a pleasure to work with and ensured a quick close, given the dealerships transitioned from one family-owned company to another. We look forward to Ed Morse Automotive Group’s continued successes and growing their portfolio. I would like to thank Sheila Umphrey, Michael Havard, Attorney/Partner, and Carol DeBerry, CFO, for their outstanding support during this transaction and congratulate them on the sale. We would also like to say thank you to Teddy Morse, Randy Hoffman, and the entire Ed Morse team for the opportunity to assist them with their first Harley-Davidson acquisition.”

Ed Morse Automotive Group is headquartered in Delray Beach, Florida, and has been family owned and operated for more than 75 years. The company was founded by Ed Morse, who established Morse Motors in 1946, and is now under the leadership of Ed’s grandson, Chairman and CEO, Teddy Morse.

The Cowboy Harley-Davidson and Powersports acquisitions will add the first motorsport franchises to the group’s lineup, while bringing their dealership count to over 30, and adding nearly 140 employees to their workforce of more than 1,800.

Teddy Morse shared, “George, thank you for all of your help!” Randy Hoffman, COO of Ed Morse Automotive, shared, “When we were in the market to get into the Harley-Davidson and Powersports business, one name kept surfacing as a Harley-Davidson expert, broker, George Chaconas of Performance Brokerage Services. George introduced us to the Cowboy Harley-Davidson & Powersports dealerships, and we are excited to have acquired all of them and grow our footprint in Texas. Teddy Morse and I want to thank George and his team for helping facilitate this very large and special acquisition. We thank him for bringing us the opportunity and look forward to growing these dealerships while we diversify our automotive holdings and geography.”

The dealerships will remain at their current locations: