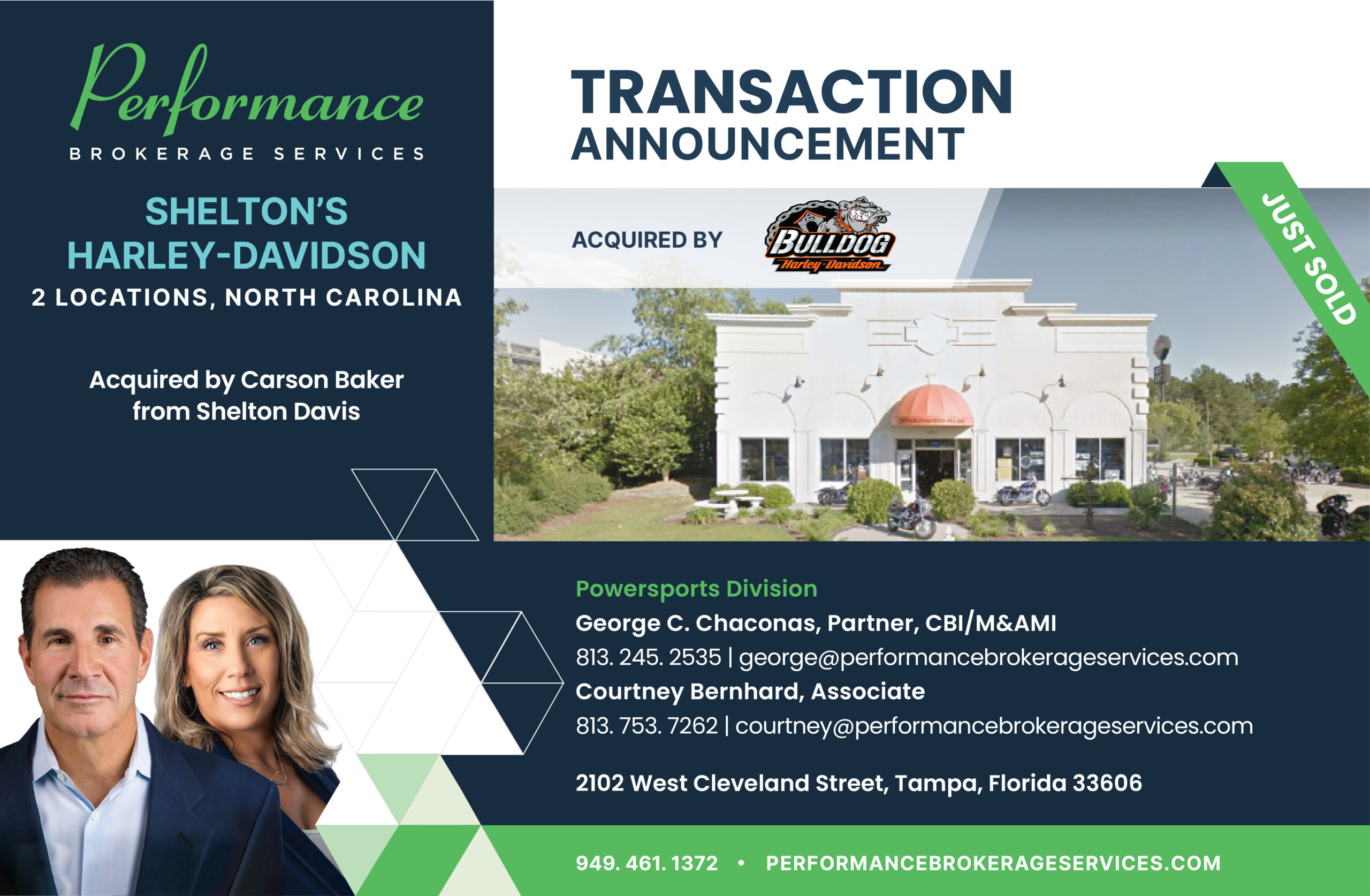 Shelton’s Harley-Davidson of Smithfield and Goldsboro, North Carolina was established by the Davis family over 30 years ago. Shelton’s love of the Harley-Davidson brand combined with Sharon’s commitment and passion for family, created a legacy that will not soon be forgotten.

Shelton’s Harley-Davidson was heavily involved in local community outreach. The dealerships hosted many events including H.O.G. Toy Run, various car and bike shows, and a Poker Run that supported multiple causes and organizations. The dealership also raised money for a local police officer through the Help Thy Neighbor program, which aided with his to return to his family home after an injury on the job.

Shelton was also known for his tremendous knowledge of Harley-Davidson history, which was displayed throughout his dealerships. Customers enjoyed admiring his vintage bikes, as well as watching his YouTube videos. It’s no doubt that Shelton and Sharon Davis’ presence will be missed. They shared the following statement on their website, “We are thrilled to finally announce that Carson Baker of Bulldog Harley-Davidson, will be the new owner. Carson is a phenomenal person, and we are so excited for him to experience the thrills and connections we have established over the years!”

Over the last 5 years, Performance Brokerage Services has advised on the sale of over 250 dealerships, making it the highest volume dealership brokerage firm in North America. In 2021, the company consummated over 72 transactions, marking a record-breaking year. George C. Chaconas, the exclusive advisor for this transaction and the head of the National Harley-Davidson and Powersports Division for Performance Brokerage Services commented, “We recently had the pleasure of helping Carson Baker’s father, Fred Baker, sell his Chevrolet store in North Carolina. I reconnected with the family at the Powersports Business Accelerate Conference in Atlanta last year, and suggested they consider buying Shelton’s Harley-Davidson, given the proximity to their other powersports dealerships. The family was excited about the opportunity. Working with the Harley-Davidson Motor Company, they were able to close the main dealership in Goldsboro and convert the secondary retail location in Smithfield to a full-service dealership. Closing the Goldsboro location fell in line with the Motor Company’s consolidation movement in over-saturated markets, such as North Carolina. It was a pleasure working with the Baker family again, and we are very excited for Carson and his wife to take Shelton’s long legacy to the next level. I also want to thank the Davis family, Sharon, Shelton and their daughter, Hannah, for trusting me again to sell their second family-owned dealership after 33 years. I wish them well in their retirement and it has been a pleasure serving them.”

Carson Baker is no stranger to the automotive and powersports industries. Following in his father’s footsteps, Carson learned the ropes of running a dealership, where he did everything from radio and TV commercials, to washing cars. He worked his way up to become the General Manager of the family’s Chevrolet dealership in Red Springs, North Carolina. Growing up on a farm in Concord, Carson spent his days after school riding 4-wheelers on the trails, jet-skis on the pond, and snowmobiles in the winter. It was only natural that talks would commence with Polaris. In 2014, he was informed that the Fayetteville territory was available. Carson was chosen to represent the Indian Motorcycle, Polaris, Polaris Slingshot, and Victory brands.

Following the sale, Carson stated, “My family and I have known George Chaconas and Performance Brokerage Services for many years. I met Courtney last year and mentioned I was looking to grow my Powersports portfolio. Several months later, I connected with George and we discussed a Harley-Davidson dealership that seemed to be a strategic fit within my existing dealerships. Courtney and George worked to help make this a smooth and successful transaction, and I look forward to working with them in the future as we continue to grow.”

The Smithfield location will remain at its current address at 1043 Outlet Center Drive in Smithfield, North Carolina, and has been renamed Bulldog Harley-Davidson. The Goldsboro location has been closed.