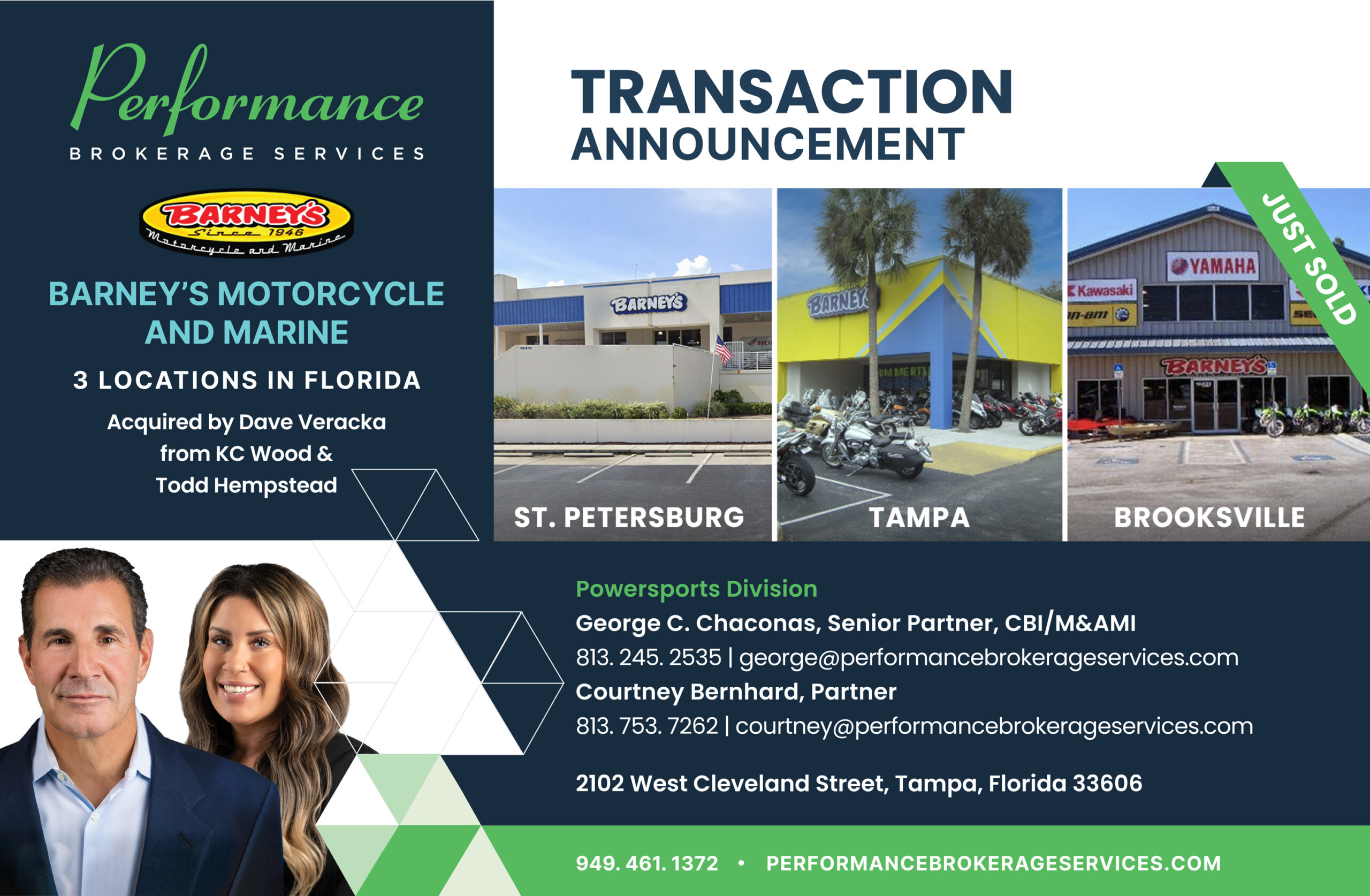 Performance Brokerage Services, North America’s highest volume dealership brokerage firm, is pleased to announce the sale of the legendary Barney’s Motorcycle and Marine, with 3 locations in Florida, from KC Wood and Todd Hempstead to Dave Veracka.

They say legends never die. After 76 years, that statement rings true for the iconic Barney’s Motorcycle and Marine dealerships. It began in Bloomington, Illinois, with Harry “Barney” Barclay and his bride, Rosalee, a young couple in love. After World War II, with a shared passion for motorcycle riding, and a $500 loan, Barney and Rosalee opened their first Indian dealership in Bloomington. Eager to share their love of riding with the community, the couple became very active in local riding groups, bike shows, and racing competitions.

After realizing that their business had limited riding seasons in Illinois, the couple decided to move the dealership outside of Miami, Florida, where the business grew beyond their wildest dreams. In 1951, the dealership was relocated again to St. Petersburg, Florida, where the original building still stands, alongside a larger, well-recognized facility for motorists traveling to the beaches of the Gulf Coast.

For the past 76 years, the dealerships have remained family owned and operated, under three generations of leadership. Barney’s son, Ray Hempstead, stepped in as second-generation owner in 1961. KC Wood, Barney’s grandson, joined the family business under his Uncle Ray at a young age, and has spent his entire career at the Barney’s dealerships. In 2004, Todd Hempstead, who worked at Barney’s as a teenager, decided to leave his career in software development and join his father, Ray, and cousin, KC in the growing dealership business. After Ray retired, KC stepped in as President, while Todd assumed the role of Vice President.

The dealership overcame many hurdles throughout its history, including the gas crisis of the 1980’s, recessions, and even a fire at the St. Petersburg location. KC and Todd persevered, each bringing their own individual strengths, and grew the dealerships into what they are today, offering on-road, off-road, and marine products to customers visiting any of their 3 locations.

Following the sale, Wood commented, “After 76 years and three generations of owning Barney’s Motorcycle and Marine, our family made the difficult decision to sell our three dealerships. When George Chaconas and Courtney Bernhard first reached out to us, we had not yet made the decision to retire. They provided valuable information as to what the sales process would entail, and before we knew it, they brought us an offer from a well-respected company in the industry. Being a large, multi-location dealer, our deal was quite complex. With George and Courtney’s help, and with the resources they recommended, we successfully navigated the many twists and turns and made it to the finish line. Todd Hempstead and I would like to personally thank the team at Performance Brokerage Services for their professionalism, industry experience, frequent communication, and persistence. If you are thinking of selling, and wondering if the time to sell is now, I would encourage you to reach out to them. Thank you, George and Courtney!”

Over the last 5 years, Performance Brokerage Services has advised on the sale of over 300 dealerships, making it the highest volume dealership brokerage firm in North America. In 2021, the company consummated 72 transactions, marking a record-breaking year. George C. Chaconas, the exclusive advisor for this transaction and the head of the National Harley-Davidson and Powersports Division for Performance Brokerage Services commented, “When my Associate, Courtney Bernhard, and I met with KC and Todd for lunch, I was not sure how serious they were about selling. Naturally, it is a very emotional and difficult decision to sell a family business after 76 years. With no succession plan, they decided to move forward and hire us. We were thrilled to have the opportunity to help the family maximize the value of their life’s work and sell their largest asset. We knew this was a special opportunity for only a select group of buyers, and ultimately Dave Veracka was the logical and unique fit. I would like to thank KC and Todd, along with their families, for their perseverance in seeing this transaction to the finish line amid the obstacles we faced along the way. I look forward to Dave Veracka and his team building on the iconic Barney’s brand. It has been a true honor and pleasure to facilitate this transaction, and I wish KC and Todd a well-deserved retirement.”

Courtney Bernhard of Performance Brokerage Services shared, “To say I’m thankful is an understatement. A year ago, I took a leap of faith and approached the owners of the legendary Barney’s Motorcycle and Marine to see if they would consider a sale after decades of ownership. Although they hadn’t contemplated selling, with careful consideration and divine timing, they decided to pursue a sale. We knew in order to be the right fit, the buyer would really need to grasp the immense dedication that Barney’s had within the racing community, their passion for the outdoors, and above all, the love of their staff. I am honored that they allowed us to guide them through this process. The efforts to complete a sale of this size, while maintaining business operations and employee morale, was no small task. I want to thank KC and April Wood, Todd Hempstead, and their entire staff for getting to the finish line, always willing to help, and smiling even when it felt like we would never see the end. They went above and beyond, working countless hours, to get the dealerships ready for the transition. It’s clear to see why the Barney’s name has been well-respected for so many years. I wish the entire family a very happy retirement, and hope they enjoy their next chapter in life. I have no doubt that Dave Veracka and his family will continue the spirit of Barneys legendary reputation and propel the dealership to new and exciting heights!”

Dave Veracka turned his passion for motorcycles into an illustrious career that began more than 50 years ago, when he opened his family’s first Kawasaki dealership in Brockton, Massachusetts. In 2003, along with his partner, Veracka acquired his first Harley-Davidson dealership. Over the years, Veracka and his sons, Paul and Michael, would continue their steady growth in the Harley-Davidson industry. In 2019, they made the decision to split the company into two groups; his sons took over the Harley-Davidson dealerships and Veracka established The Motorcycle Company, a new dealership consulting group.

While Paul and Michael continue to be very competitive in growing their footprints on the east and west coasts, they may just have a new competitor in town. Dave Veracka has come out of dealer retirement and is well on his way to building a powerhouse group of on-road, off-road, and watercraft dealerships.

The dealerships will remain at their current locations and have been renamed the following: