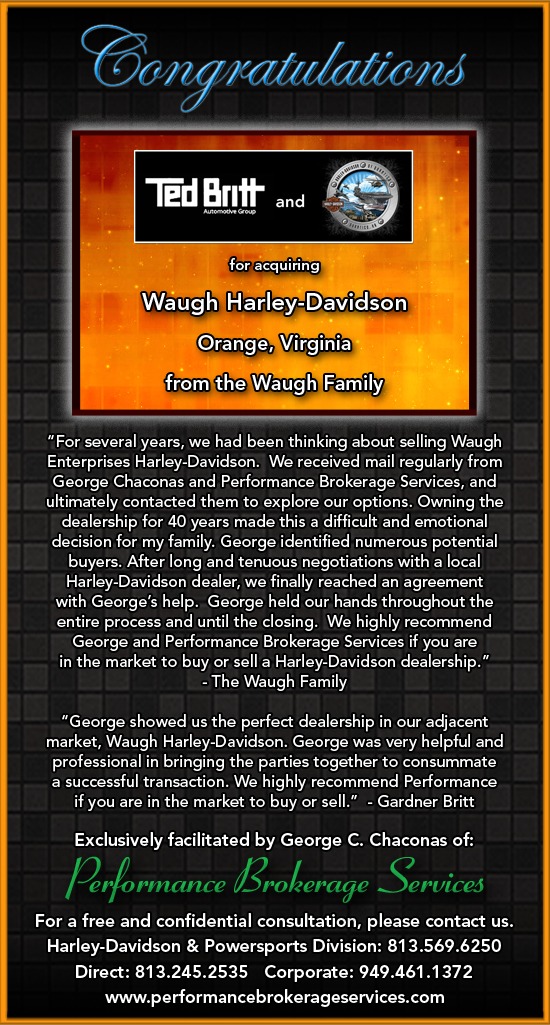 In 1976, the Waugh Family established Waugh Enterprises Harley-Davidson, Inc. which prior to the sale was considered the oldest Harley-Davidson dealership in Virginia. Founder, P.D Waugh, began his career in 1939 offering automobiles and tractors, with Triumph motorcycles being offered for sale starting in 1953 and Harley-Davidson motorcycles shortly thereafter.

In 1998 the dealership expanded into a 10,000 square foot showroom with designated Parts and Service departments, currently residing on 10 acres. Don Waugh, Marcelline Waugh and Donna Waugh Robinson contacted George C. Chaconas, a Harley-Davidson and new car dealership broker from Performance Brokerage Services to assist them with their negotiations with a local dealer. “After long and tenuous negotiations with a local Harley-Davidson dealer, we finally reached an agreement with George’s help,” shared Donna Waugh. She continued, “George held our hands throughout the entire process and until the closing.” Read the Official Press Release.

For several years, we had been thinking about selling Waugh Enterprises Harley-Davidson. We received mail regularly from George Chaconas and Performance Brokerage Services, and ultimately contacted them to explore our options. Owning the dealership for 40 years made this a difficult and emotional decision for my family. George identified numerous potential buyers. After long and tenuous negotiations with a local Harley-Davidson dealer, we finally reached an agreement with George’s help. George held our hands throughout the entire process and until the closing. We highly recommend George and Performance Brokerage Services if you are in the market to buy or sell a Harley-Davidson dealership.